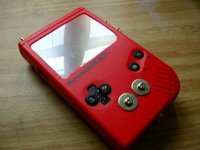 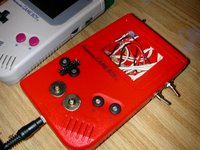 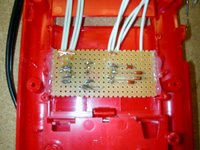 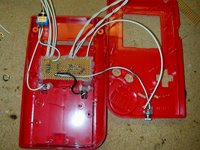 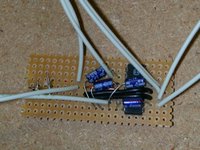 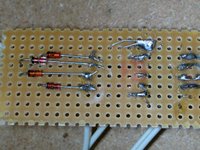 A little something something I made last nite. The circuit is incredibly simple and consists of only a Quad 4093 Schmitt Trigger IC, 4 1uf electrolytic caps, 4 Photo-Resistors in the 140k Ohm Range, and 4 Diodes. The basic idea for this circuit came to me from the Electronic Candle schematic in the Nuts and Volts magazine, however it was greatly changed. The inputs of the gates were left open, there is no connection between the Positive voltage and the gate output. The outputs of all the gates are summed up through the 4 Diodes, this mod is probably the most critical step. When these were summed up without the diodes, the signals did not output at all. Also it is interesting to note that an 8 Ohm impedance resistor was not needed on the output jack. As a matter of fact it caused most of my headaches. The internal impedance of the IC seems to match audio output just fine. As far as the case goes, I think that this worked out perfectly. The Red Gameboy was long dead, and the grommets fit perfectly inside the A and B buttons. The arrow pad fit grommets as well, however a center metal piece had to be added to cover the hole. Select and Start became touch contacts that help the modulation. A power switch was added where the normal power switch used to be, while observing the On-Off positions. A power LED was added to the side where the adapter jack used to be located. The two remaining switches are used for Low-Pass Filtering as well as signal feedback. Unfortunately I never had the Screen protector for this case, so I had to cut out a piece of semi transparent plastic to cover the hole. The video turned out good, but the sound did not record very well. So if you decide to view it, please turn up the speakers all the way up in order to hear the audio track. More audio links are also available. I may post the schematic for this thing at some point when I have more time. 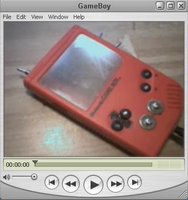