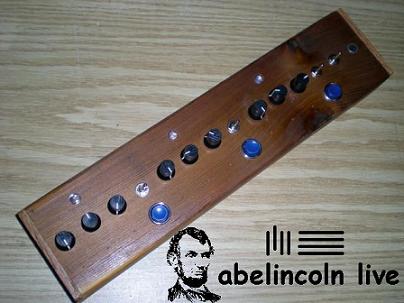 In continuation of my previous post on the Yada Yada Yada samplers here is an instrument that I threw together in one evening. The “abelincoln live sampler” utilizes 3 Yada Yada Yada voice recorder circuits and simple passive 3 channel mixer for the Output signals. I only went as far as summing the resistors and didn’t do anything with the powered section in the schematic. Maybe in the future builds.

The Inputs of all 3 boards are wired in parallel so each sampler receives the same signal, either the Mic or Input via 1/4 inch jack with a switch to select between the two. The signal from the instrument jack is not attenuated, however a single potentiometer should be able to do the trick or if you really want professional quality a simple 20db pad can be constructed. I thought about wiring each sampler individually, but unless you want to sample 2 different things at the same time there is really no need. One improvement maybe to add a 3rd option of sampling whatever is being played back by the other two samplers to “bounce” tracks. The playback buttons were all wired to switches for continuous loop playback. If you want one shot playback, toggle the switch back and forth. The record buttons were replaced with heavy duty panel mount push buttons. Something to note about the controls is that they are activated by connecting the Ground signal to designated spots on the board. This makes wiring a bit easier because the Ground can be made into a common bus. Things that share the Ground are: Buttons, Mic element, the – Power connection (obviously), and the Line In jack, but not the Speaker, at least I haven’t tried wiring it to the Ground. The output is carried via two separate traces and there must be a good reason that. I just picked the same trace on all the boards as the common for the mixer inputs.

All 3 circuits are powered by a single +5 Volt LM7805 Regulator with a 9 Volt Battery going into pin 1, Ground on pin 2 and Pin 3 is connected via a bus to all of the Positives on the boards. YYY boards appear to only power ON when the Play or Record buttons are pressed, but the same does not apply if you are using a Vreg connected to a battery. In that case its always ON and will drain eventually, so a power switch with an indicator LED would probably be a smart idea.

The pitch control knobs work fairly well. One only controls the Playback and the other controls the Recording and the Playback. It is possible to slow down the recording speed and get a lot of grainy loop-able time. The playback of that recording can be either speed up or slowed down even further, making things very low bit rate sounding. During the lower recording rates the entire CPU will slow down and the recording will not start until the LED is illuminated. The pitch of the recording tone is usually a good reference for what the speed is. It is also possible to record the pitch changes during while the LED is on, which puts another interesting spin on things.

This is the first stab at a looper device, the construction was done quickly and with as few components as possible. Lots of things could be done differently in version 2. More images are located here.

Possible improvements would be: