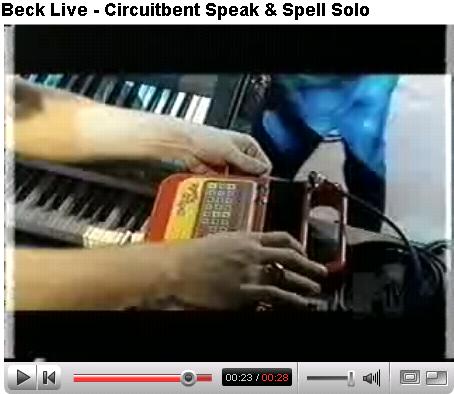 Apparently the artist Beck has decided to push the envelope even further then the 8 bit remixes of Guero. Now he includes circuit bent sounds on his latest album called The Information. Most obvious is the song “No Compaints” (Hot Linked MP3 ) with a little glitchy breakdown. This youtube video shows a live MTV jam with a Speak and Spell solo done by the keyboard guy on stage, all while Beck is scratching on his cool Mp3 deck. I guess this is from sometime in 2005. Thanks to MadManG for sending this in.

*SuckTube has removed the video, but unfortunately they can’t erase it from our memories. *

Here is a recap:

00:04 Camera Pans to a bunch of people dancing on stage

00:10 The keyboard guy picks up a Speak and Spell and starts twisting a knob creating single oscillator theremin like sounds and the whole band lets him solo on that for a few measures.

00:29 Beck resumes the song by scratching on his CDJ and people are dancing again.

Heh, at least thats what I think happened. Did anyone happen to cache this or has the original file? Feel free to comment with a link, or your memories of this video.