I came into circuit bending from a purely visual arts background with very minimal electronics knowledge.  I understood the very basic concept of an oscillator when I first started bending- some sort of circuitry that creates a waveform that oscillates between high and low states, but I had no idea what sort of circuitry went into making an oscillator nor did I understand how exactly I could incorporate an oscillator into a bent device.  I have since found there are many different ways to go about building an oscillator and there are a many different ways you can use them to control bent devices.  I have had very immediate success with GetLoFi 555 oscillator kits.  Their frequency is customizable to your purposes, depending on the potentiometer and capacitor you choose to set the oscillation range of the 555, you can get two (and possibly more) different wave form outputs, the board is conveniently tiny and ready to assemble, and it can often operate stably off the bent toy’s own batteries.

I have installed GetLoFi 555 oscillators into several different toys now and for each toy the oscillator has been used somewhat differently.  There will be a series of articles examining the insides of these toys, starting with a recent toy, the Animal Caller.  I found this toy for $0.99 on a trip to Michigan several months ago.  I was drawn to the Flintstone-esque look of the toy right away as well as the pictures of interesting animals on the toy’s sound selector, like the Hyena and Kookaburra.

It looks like a few benders on YouTube have already gotten inside of these toys.  The first video gives you an idea of what the toy sounds like normally, the second two show benders rocking their bent Animal Callers through some delay.

There is an On/Demo switch on the side of the device.  When set to “Demo” mode, it will play an animal’s call once when the selector is moved to a new animal.  When set to “On” mode, you actually blow into the mouthpiece and it causes the selected animal call to loop as long as you keep blowing.  I had never seen an interface like this on a cheap toy before.  Upon taking it apart, I found that your breath travels from the mouthpiece into a plastic tube which directs it onto a fan.  While the fan spins from your breath, two holes in the fan repeatedly pass between an infrared emitter and an infrared sensor, which causes the sounds to loop.  Unfortunately I didn’t photograph the toy or its guts in an unbent state.  The breath mechanism grossed me out and didn’t work very well; by removing it I was able to free up a lot of space inside. 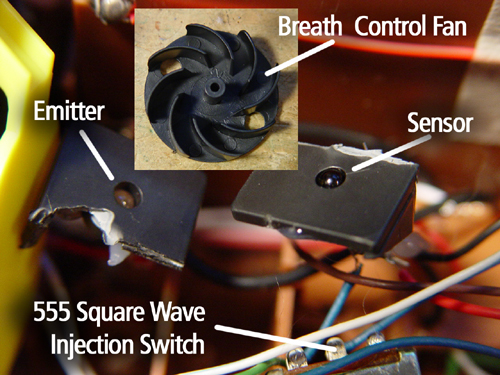 Using a multi-meter, I was able to read the voltage at the infrared sensor when the hole in the fan passed between it and the infrared emitter.   When the hole passed, the voltage dropped to 0 on one of the sensor’s legs, which stays at +4.5v when the sensor cannot see the emitter.  I connected the square-wave output of the 555 kit to this leg and it simply worked; when the 555 is oscillating at its highest operating frequency, determined by the 4.7 uF cap and 50k pot, it somehow makes the toy think the fan is spinning, causing the animal sounds to loop indefinitely. 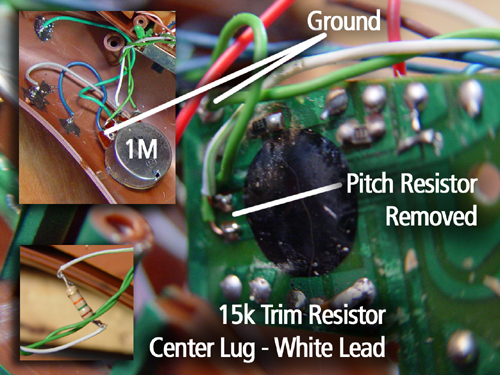 I found the pitch resistor, which is directly to the left of the black blob on the toy’s circuit board.  I was able to replace it with a trimmed 1M potentiometer with the remaining outer leg going to ground.  Body contacts are attached to each leg of the potentiometer. I was also able to feed the ramp wave that the 555 outputs (coming from the capacitor leg, pin 2)  into the toy’s pitch resistor instead of a +4.5V to give a scribbly warble. 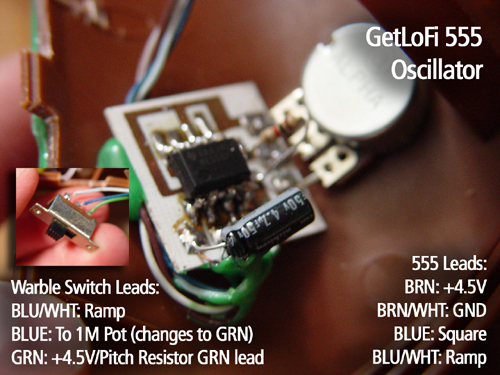 I added a 1/4″ output and used an SPDT switch to switch one of the toy’s speaker leads between a speaker lug and the 1/4″ output’s tip.  I then connected the 1/4″ jacket to the other speaker terminal, no switch from the toy’s circuit board.  The sound coming from the output was really distorted at first, so I tried shorting the two leads of the output with low resistance to see if that would replace the missing resistance from the toy’s speaker (8 ohms), which I was removing from the circuit.  It worked,  and I found that as I increased the resistance on my resistance substitution box, the distortion increased.  My friend Zach who was looking on as I was working suggested I try installing a distortion potentiometer, and sure enough a 1k potentiometer between the two legs of the 1/4″ output lets me dial in the distortion of the sound going to the 1/4″ output quite nicely.

Here’s an overall view of the Animal Caller Control Layout.