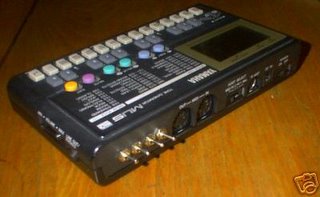 Finally something that is fairly high tech being subjected to the same circuit bending principles as the simple and cheap toys. The result is awesome to say the least. How and why is further explained in the email quote from the creator. Enjoy.
Audio Sample 1 & Sample 2
Auction link here
Unbent Mu5 for sale $75 BIN.
Words from the maker, “…I decided to try bending the MU-5 because I already owned one, and I had just finished bending a Yamaha PSS-790 synthesizer, which I also happened to have and was inspired to bend it from a picture of the board on the Tablehooters site. The results of 790 were so good that I figured the MU-5 might be good too, because both use Yamaha ‘AWM’ PCM synthesis. As it turned out, I was right, the bent MU5 is just as amazing as the bent PSS-790. Unfortunately I did not take pictures of the inside, all the bends exploit a single IC, of which there are over 20 pins that could be exploited. I only used 8 for the four switches. The real challenge was soldering to the tiny pins of that IC. It would be very difficult if not impossible to exploit all the IC pins even if there was enough room for switches (or a breakout box), because it would be very hard to solder pins next to each other. It’s only possible to solder every other pin. It was also somewhat difficult to keep the wires from the bends from interfering with the movement of the volume slider. ” ….and there you have it.