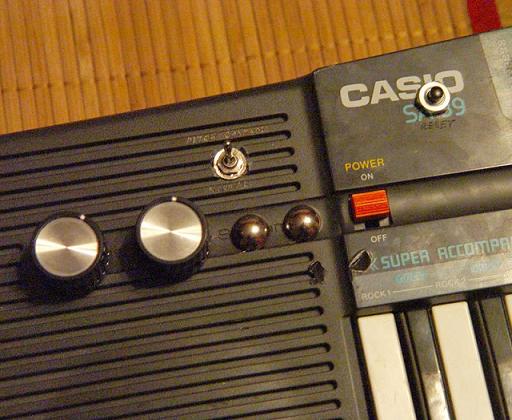 This is my first successful attempt at pitch-modifying a Casio keyboard using the Getlofi.com LTC1799 Precision Oscillator Kit. The kit oscillates at frequencies from 1KHz to 30Mhz and its output frequency is controlled with a potentiometer. The oscillation frequency from this kit can be substituted for the constant oscillation frequency a device receives from its internal crystal. The kit’s variable frequency will allow you to control the pitch of a device when it is patched in place of –or sometimes in parallel with—the device’s internal crystal. Spunky Toofers is currently using these LTC1799 Precision Oscillator Kits as pitch controllers on his Casio SK-1s and SK-5s.

Both Yamahas and Casios seem to like the LTC1799 Precision Oscillator Kit. I installed the LTC1799 Precision Oscillator Kit in a Casio SA-39 Keyboard. The Casio SA-38, -39, and -21 all appear to be the same keyboard, are quite common, and can easily be found for less than $5.00. Their features include a nice selection of tones, a wide selection of rhythms (though no rhythm fills, oddly… perhaps there is an easter egg for those? Anyone?), 5 drum pads, and a 1/8” out. It also has stereo speakers, which is nice if you want to remove one for space.

Fitting the LTC1799 Precision Oscillator Kit to the SA-39 took a little fine-tuning. The kit comes equipped with a 1M potentiometer, but the range of tuning with a 1M pot was rather narrow when controlling the SA-39. After some experimenting, I decided on a 50K pot and 10k pot in series in place of the kit’s 1M pot, producing a wider tuning range and course/fine adjustment. I later added body contacts in parallel to these two pots (not the crystal) and they are quite expressive and stable. The 50k and 10k were values that were handy, I think that perhaps a 20 – 25k and a 5k might make a comparable, perhaps improved control combination. Normally the LTC1799 Precision Oscillator board mounts behind the included 1M pot, here you’ll see it is simply hot-glued face-up on the SA-39 circuit board.

With this configuration of 50k and 10k, however, there are still dead zones at the high-end and the low-end of the dial; the keyboard will want to glitch out and sometimes die or freeze when you dial in too high or too low a frequency. Above and below a certain frequency range the keyboards just won’t function “normally” and will start to go hay-wire. You can then control the pitch of the ensuing glitch if the keyboard doesn’t choke. A trim pot could be used to set the upper limit of the frequency range. 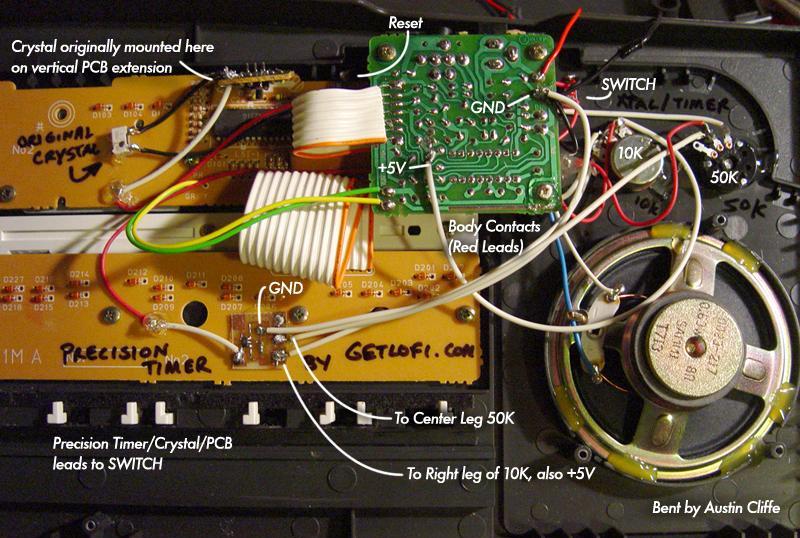 A +5V point on the SA-39 circuit board was found by probing with a multi-meter. You can see this point on the SA-39’s circuit board with trace side facing out (+5V). The lead connects to one lug of the 10K Pot. Attached to that same lug are leads to one of the Body Contacts and to the LTC1799 Precision Oscillator Board’s power input. The Precision Oscillator Board also has a ground connection.

The keyboard’s crystal is removed and hot-glued to one side (Original Crystal). Probing with the Precision Timer’s output helped determine which of the 2 holes left by the vacated crystal gave the desired control over the keyboard’s pitch (it is the top hole, with the keyboard laying open, face down). A lead from this point is soldered to the middle lug of a toggle switch, with the two side lugs leading to a) the Precision Oscillator’s output and b) the original leg of the crystal that had been in that hole. The remaining leg of the crystal is reconnected to its original hole with a lead. When the toggle is up, it is connected to the crystal and functioning normally and when down, the keyboard receives its pitch frequency from the Getlofi.com LTC1799 Precision Oscillator Kit.

In looking around online, I have seen a number of different bends for these keyboards. I believe there is a point-to-point distortion on the board that changes with variable resistance. There is also a way to make it glitch, I have seen this done with both body contacts and pushbuttons. I assumed this could be done by simply bridging the two legs of the crystal momentarily, as is some times the case with Casio keyboards, but I didn’t have any luck in my tests. Please, dear readers, feel free to comment on the location of these other bends.

The pictured keyboard is already in the hands of the band SSM, who I went to see in Hamtramck, MI, recently. I didn’t get as deeply into this keyboard as I would have liked, as you can tell from the last paragraph, but this configuration made for a quick and expressive pitch bend. There is also somewhat reliable glitching that can be dialed in at the high and low end. I have several more of these keyboards, and my goal is to get some more of these distortions and instant glitches mapped out. You will see my future work documented here at GetLofi.com. Keep those soldering irons hot!