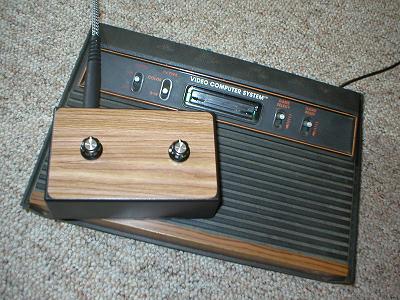 Panaphonic has recently completed another APC build using two 555 ICs instead of a single 556. The outside case was decorated with a woodgrain adhesive in honor of the original Atari 2600. This type of woodgrain material can be purchased from a variety of hardware stores and supermarkets like Walmart, priced at around $5.00 for a huge roll. Please see my previous post for more info. I guess the next logical step is to have the APC circuit inside of the actual console. Great work.

After seeing these instruments created by EX PMX I initially had no clue as to their purpose or function, but after further readings, by best guesses are as follows. The M(other)-Switch and the LBBM ( Light Bridge Beat Machine ) are in essence audio/video signal switchers with signal levels being controlled by laser light hitting various sensor points kind of like laser light show kit creating patterns and hitting a stationary photo sensor at quasi random times. Except that later-on in development EM PMX replaced the DC motors with Stepper motors for more rhythmic control over the audio and video with the help of MikMo parallel port sequencer software. A quite sophisticated diagram of the M-Switch is available here. Most of the modules strung together can be purchased as kits parallel PC control and Light activated switch from a variety of sites and local hobby shops. The M-Switch faceplate contains an array of switches as a patching matrix for the signals and the knobs control the sensitivity parameters of these individual switch modules. By using light sensitive switches the Attack and Delay of a particular signal can be modified creating a very complicated analog feel. Cool design indeed, thanks to Karl for sending this link.

Body contacts can make the simplest of bends sound really cool. But adding the contact points to a pitch resistor of a toy may be a mystery to some circuit benders. There are two ways to add these contacts to the casing of a toy. One is documented in the Gijs’ nice tutorial depicting the process of using a hot soldering iron to heat and melt the nail all the way through the eye never to less, of a plastic elephant. The Geij’s webpage calls for “chair nails”, however those can also be called “tacks”, “upholstery nails”, or ” furniture nails”. Sometimes the caps on these nails may need to be sanded because they are covered by clear coat paint, which would impede the contact with the skin. That is one way to get the job done, but I often prefer a less dangerous method of using small drill bit to make a hole of same diameter as the nail. Then with a dab of glue to the underside of the cap the contact is secured. This later drilling method eliminates any possibility of burns, unless you were use your finger to hold the contact in place while soldering the wire to it. As well as keeping the soldering end of the mail clean from toxic plastic which may hinder soldering and create nasty fumes. I guess it all boils down to what tools you have available for the project. Thanks to Karl for sending this link. 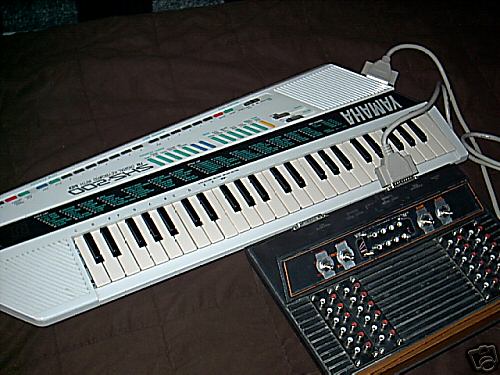 This pristine Circuit Bent Roland 707 was sent in by J-Prater who also authored the Singing Bird Bolt-bay keyboard. The breakout box houses 3 discrete 555 timer circuits and a MIDI switch Array kit (MSA) that can be patched to various bend points on the 707 for sonic mayhem. The DB-25 and the MSA are from Highly_Liquid’s fine line of kits.
Sample1-Crash

Alpha_Mod is the complete guide to modding your C64 in order to take advantage of the Prophet64 Cart, which is back in production now. Everything is included: potentiometer mods, DIN Sync, video output, and even serial interface for saving and loading files. Great pictures and lots of valuable text descriptions. Sweet post Via Hack a Day.

The so called “Atari Punk Console” device is a great start for builders interested in working with components and circuitry to produce Bleepy-Bloopy-Gitchy goodness. Using a 556 dual timer IC and a handful of other components one can be built quickly. The basis for this noise maker was a schematic originally published by Forest Mims III

, which now can be found around the web and posted above for easy reference. The APC can be built into any case of your desire, and in the case of The SquareWave Parade even a vintage Atari joystick. The circuit is not only easy to build, but it is also easy to modify. The 556 IC is very resilient and cheap so don’t be afraid connect various pins to each other in order to discover new sounds. Touch contacts can be added in conjunction or as a substitute for the potentiometers and different values of capacitors can be swapped in to change the tone color dramatically and provide greater expression. Lots of links are available on this great little circuit: 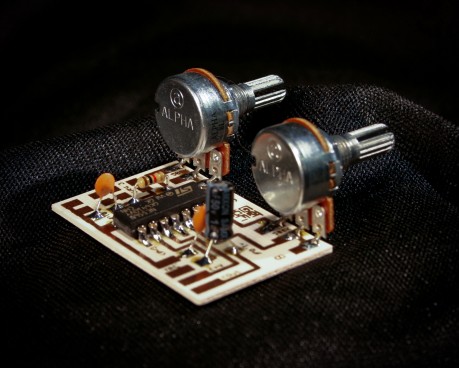 Atari Punk Console is now available as a Kit from GetLoFi for only $24.

Its rediculus that I get excited about a Buy It Now $35 USD SK-1, sad but true I’ve seen people bid them up to over $50. So snag this one, only thing missing is the battery cover. The seller also has an SK-5 for $39.99 listed with a BIN. 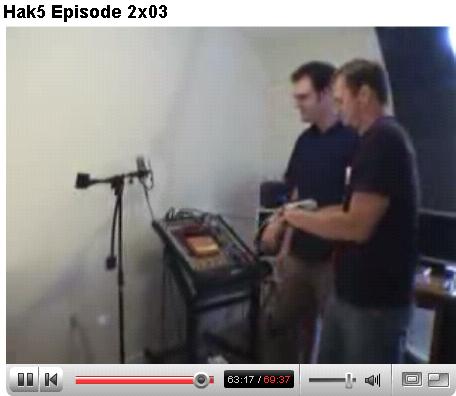 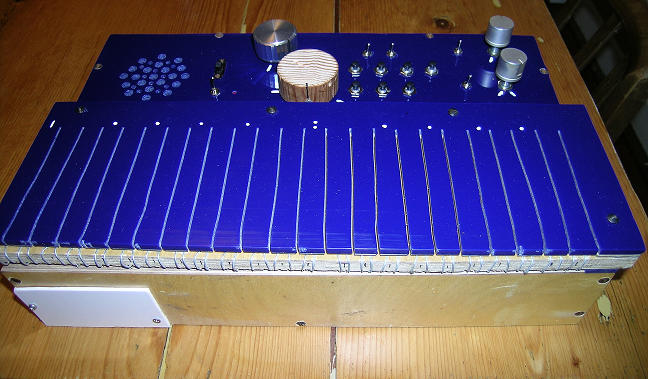 This casio PT-10 was completely rehoused in a case made from spare materials by Leadtowine. The finished results and tips were posted to the benders group forum ( Account required to login ). Certain bend points were found with the help of this schematic posted earlier on GetLoFi. Nice work, I especially like the keyboard arrangement from a single piece of Plexiglas. Almost like a thumb piano, yet its a clever way to make a keyboard like interface without too much hassle.