Regular readers of GetLoFi will recall announcements for a number of circuit-bent/experimental electronic live events during late 2009 here in the Midwest.  I was lucky enough to catch some of these performances with my camcorder.  I have been slowly adding the footage that I captured to my new Vimeo account and they are available for viewing at the new Creme DeMentia Vimeo Channel.  Below I have embedded several videos with some information about the performances.  Although I have not added every single video I’ve taken, I’ve been trying to add at least one new video a week as upload limits allow.

e^3 Micro Tour – GetLofi contributors Talking Computron, Creme DeMentia and Pelzwik teamed with Tim Kaiser to play a 3-night string of shows.  We started with a show with LWA in Iowa City at the Picador and then continued on to DeKalb, IL to play at Krystal’s Ultra-Lounge;  we ended in Chicago at i^3 Hypermedia,  where we added Roth Mobot to the bill and streamed the entire night of performances live online.  Video captured from the show at i^3 Hypermedia can be seen embedded in an older article here on GetLoFi, the performances I captured in Iowa City and DeKalb are embedded below.

Cincinnati –  After the e^3 Micro Tour, Tim Kaiser invited me to accompany him to Cincinnati for a couple of shows he was playing there.  I was able to play with Tim and Thriftsore Boratorium at the chilly Semantics Gallery.  Thriftsore Boratorium put on a very interesting set, broadcasting on several different frequencies to a dozen or more portable radios.  It was very bizarre to listen and move around in the field of distributed radios, hopefully the video captures some of that spirit.  The following day I shot some overhead footage of performances from David William and Tim Kaiser at the Contemporary Arts Center.  I had no idea what to expect from David William’s performance and was pleasantly surprised.  His approach is very subdued and I like the way he has re-purposed every-day objects as playable drone generators.   I was very happy to make his acquaintance and catch his performance.

The 2009 e^3 Mini Tour with Tim Kaiser, Roth Mobot, Pelzwik, Creme Dementia, and Talking Computron was a success. We all learned the difficulties of taking circuit bent gear on the road and repeat back to back performance, like sound checking every instrument and simply running everything in mono. The videos from our last stop in Chicago are available with the help of our Counter-Broadcast friends at HyperMedia i3 also huge Thanks to Mike Una for recording. 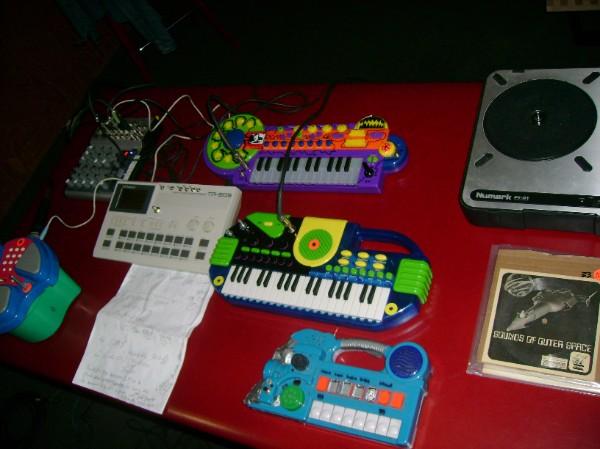 I recently saw a show at the PHAROAH’s Den, Dec. 27th in Riverside (About an hour drive out of Los Angeles).
The night was jammed packed with BENT sounds & noise!
A wide selection of musical styles from ethnic world instruments to homemade circuit bent devices and ???

Phog Masheen had a nice set mixing strange & unique sounds from various world instruments w/ contact mics sending the sounds through various effects and even using a muffler from an 80’s motorcycle.
[youtube]http://www.youtube.com/watch?v=gO-g1VNUbC0[/youtube]

He was followed by a special trio featuring: DOG, a member of Caveat Emptor and Phog Masheen got to stay on stage.
I missed most of the this set due a LONG coffee line..crap!
[youtube]http://www.youtube.com/watch?v=3tK527Ke1y8[/youtube]

Following them was an awesome set of circuit bentness from
Skin Sink….with a table full of goodies and strobe light visuals…great effects & fantastic sounds too!!!!!!!
[youtube]http://www.youtube.com/watch?v=nrPkQxs1uus[/youtube]

Then the building was BLASTED BY ENDOMETRIUM!!! WHOA!!!
Intense barrage of sounds, noise, audio spoken samples, the house system went out 2 times but he kept on going like nothing ever happened….you could hear his bent gizmos from his table when the sound went out. He got to finish his set with the sound system working fine. You could see him just behind a row of folks with camera phones and portable cameras flashing and filming. Cool meeting him in person, we have been emailing for some time now. [youtube]http://www.youtube.com/watch?v=4en2x8pALl8[/youtube]

The night ended with a set by White Marsh….with an interesting selection of electronic devices and fx that produced some real interesting layered analog and digital tones.

Tawee Kiva (the Host) was spinning electronic and avant-garde records between sets, keeping the vibe flowing….. 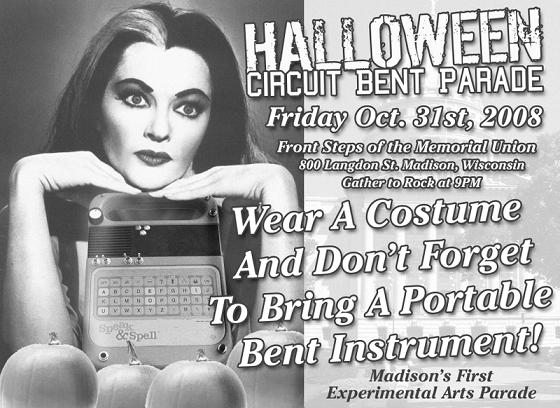 Here’s a Halloween you might never forget! It’s going down in Madison, Wisconsin on Friday October 31st!!!! Meet at the front steps of the union (800 Langdon St.) @ 9PM! Come hang out, talk shop and march around downtown while the infamous Freakfest ’08 is going on! Guaranteed 1000’s of people to make it a great night to get your bend on! 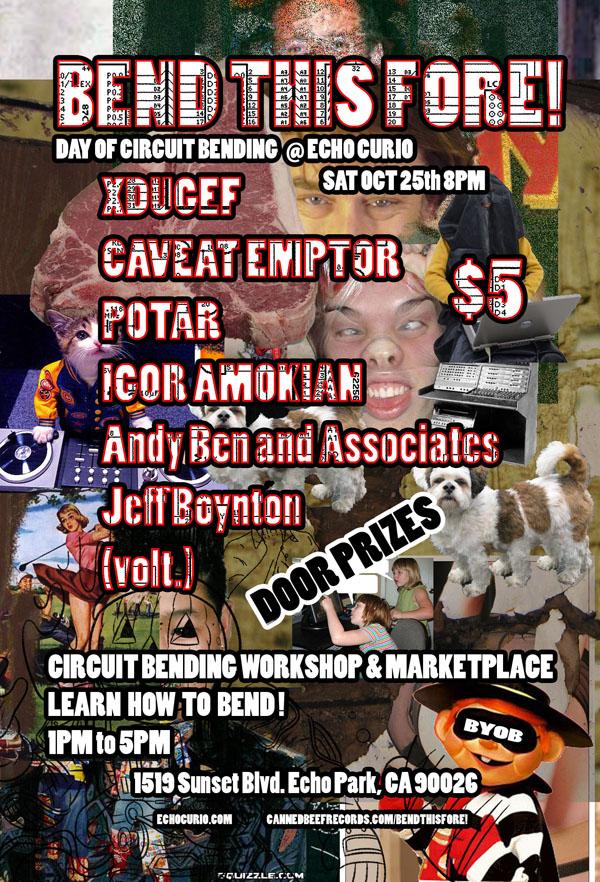 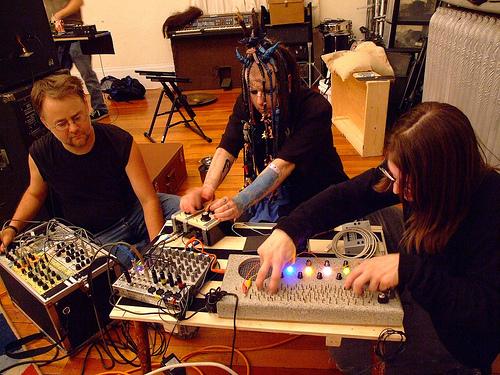 Circuitastrophe 08 was intense, so much that we are still catching up on rest. Huge Thanks goes out to the organizers Mark 1/2 Mang and Nebulagirl for all the hard work in bringing this together and to all the venues we had privilege of exploring: Art Damage Lodge, Mur Mur, Symantecs Gallery, The Mockbee, and the CAC in Cincinnati. The event was incredibly fun and well documented. Next few posts will share the treasure trove of media from those 4 days. First up are some room recordings of sets that were played at the Art Damage Lodge.