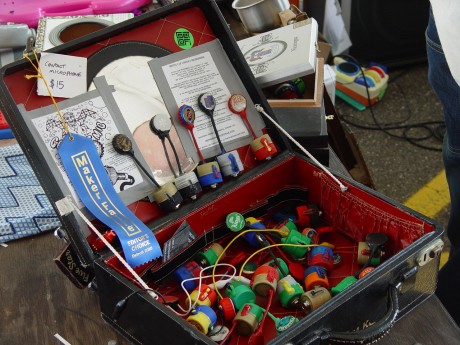 Detroit Maker Faire 2010 was quite a blast.  CMKT4 headed up to Dearborn, Michigan with Michael Una and Tomer Gal for a busy weekend of demonstrating and performing.  CMKT4 played the main stage both days and Michael Una played the second day. Our Bottle-Cap Contact Microphones won an Editor’s Choice Ribbon and got written up on Boing-Boing by Make Editor Mark Frauenfelder.  Mike Una also won an Editor’s Choice Ribbon for his live performance.  Here he is setting up on the main-stage: 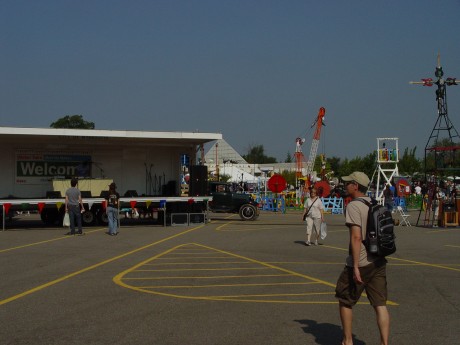 I’m so glad we went, it was a fantastic experience.  We got to meet so many interesting people who are doing interesting things.  I was able to sneak away for an hour on the second day and shoot some photos, here is some of what I saw: 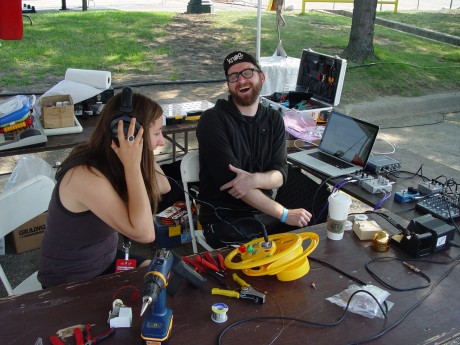 Here are Nina and Jeff from Omnicorp, Detroit, a relatively young hacker-space.  Nina and Jeff were demonstrating circuit-bending at their booth to Maker Faire attendees.  CMKT4 will be headed up to Omnicorp to present a workshop on building contact microphones Saturday, August 28th.  Details here. 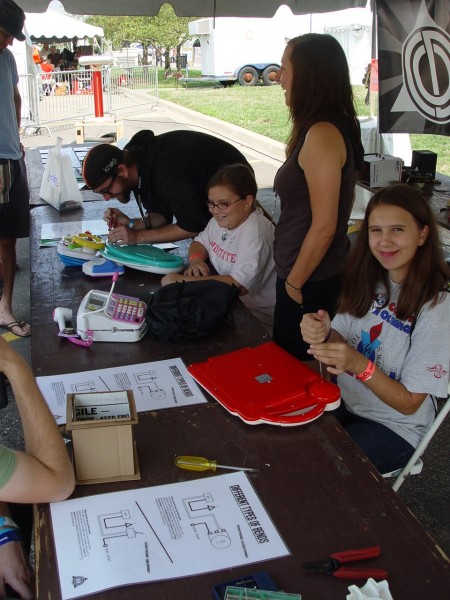 Another group of makers were controlling these huge robots, which were playing some very loud noise music. 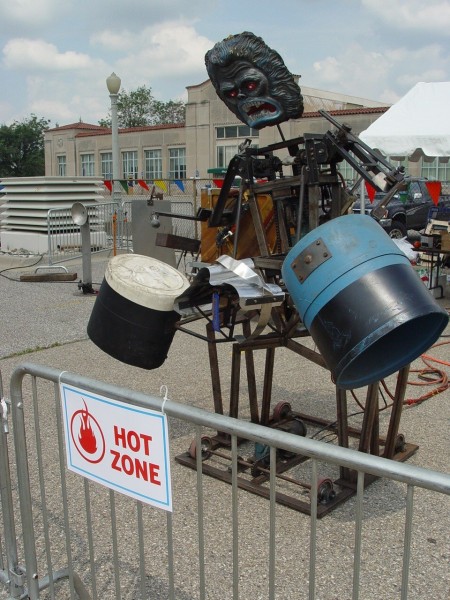 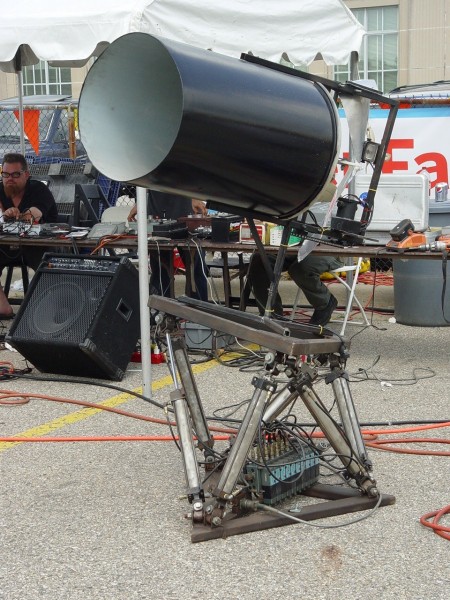 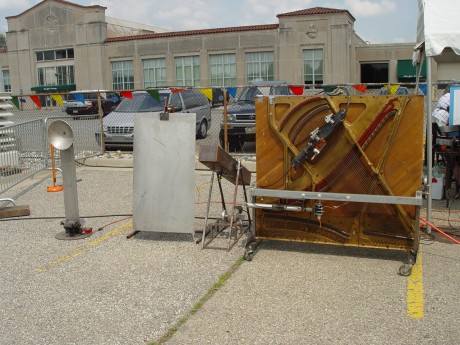 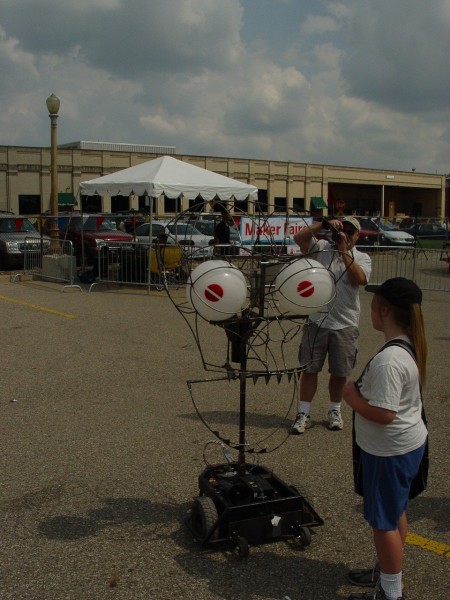 Here someone made a jug organ, I thought this was really neat: 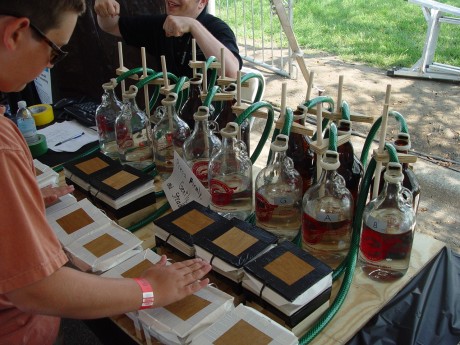 CdS cells were inventively used to read data from player-piano scrolls and control an array of solenoids that play the keys of a modern keyboard at this exhibit: 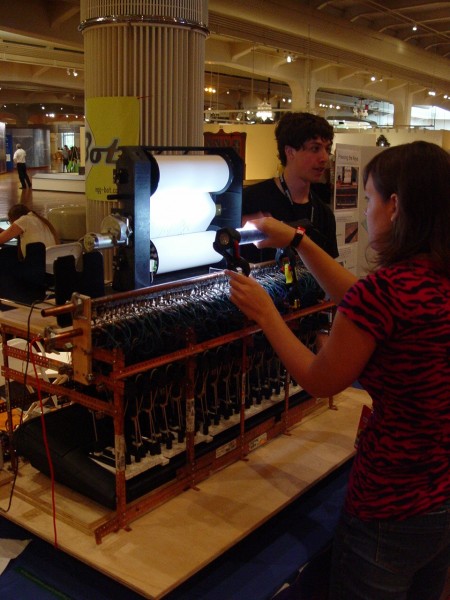 An interesting by-product is the MIDI code being generated from the scroll by the keyboard being physically played.  Next to the main stage was this bicycle-driven guitar wind-mill called the The Axe Grinder. 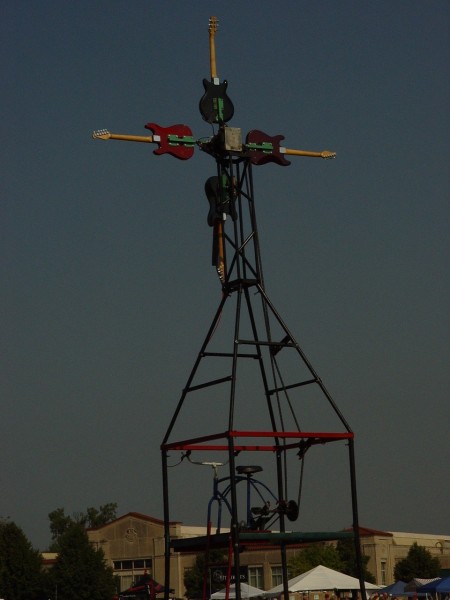 There were of course plenty of vehicles at the Maker Faire, but my favorite had to be the Sashimi Tabernacle Choir.  I’m glad that somebody figured out something to do with Big Mouth Billy Bass and all his pals other than hang it over the back of the toilet.   All the fish and lobsters are made to dance and lip-sync to popular favorites, such as Bohemian Rhapsody.  I actually got to sit in the driver’s seat for a little while and operate the Lobster Conductor;  the control was two two-way switches, one to rotate the lobster, one to extend and retract the arm, and a push-button to bounce the lobster and “conduct” the marine choir. 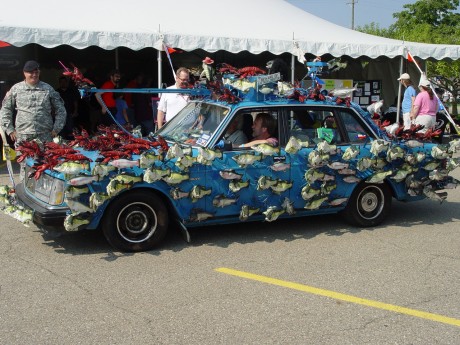 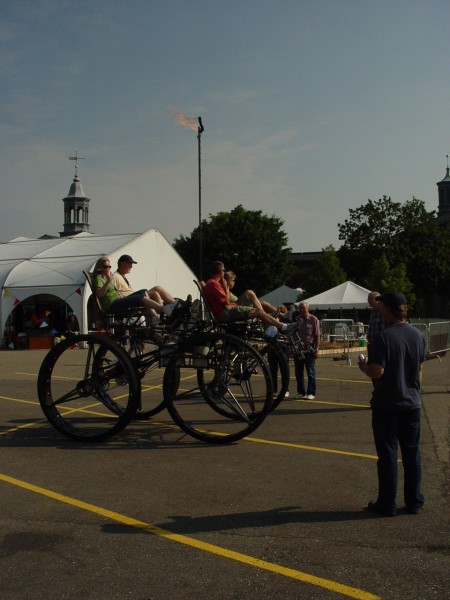 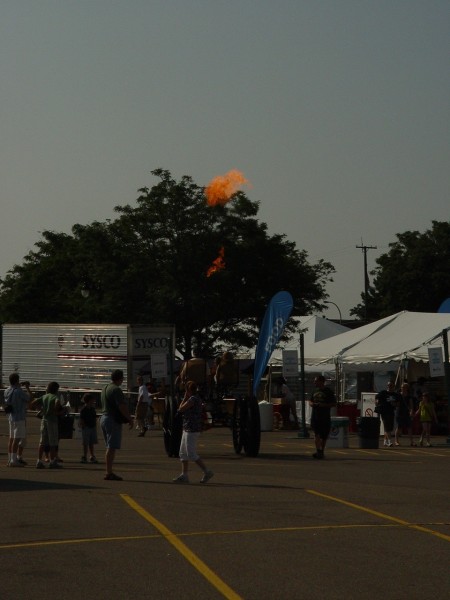 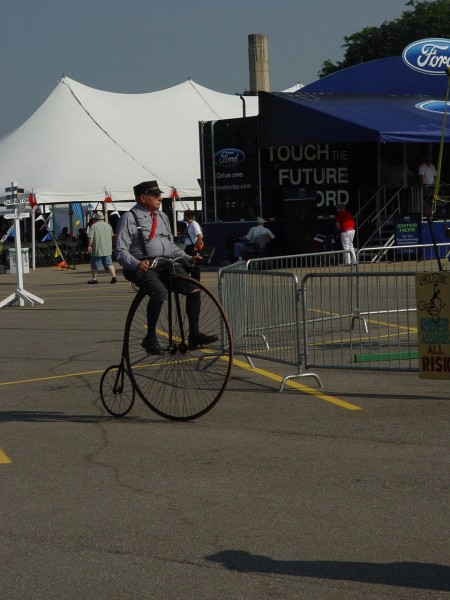 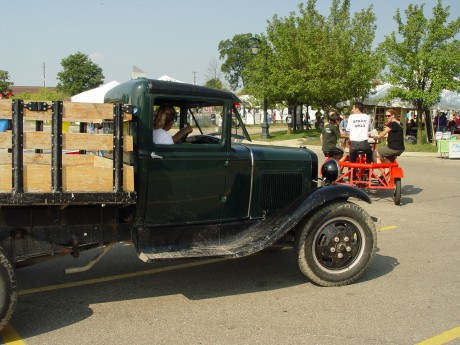 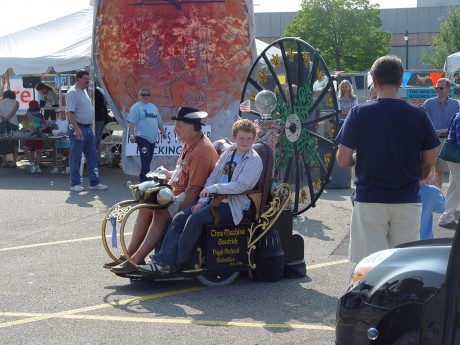 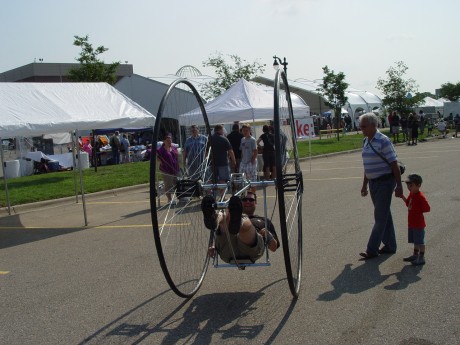 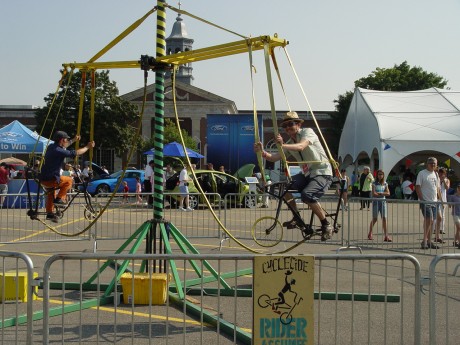 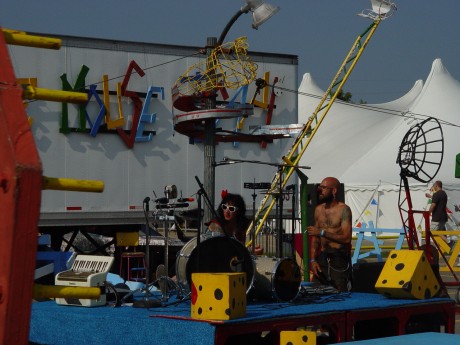 Some of the crew from Life-Size Mouse-Trap taking a break from a long, hot day of repeatedly crushing a Chevy Mini Van under a giant safe.   More Robots! 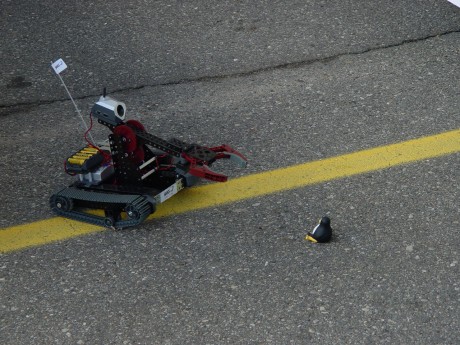 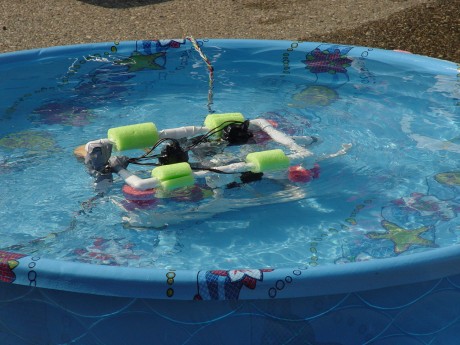 Various doo-dads made with a Cupcake CNC machine: 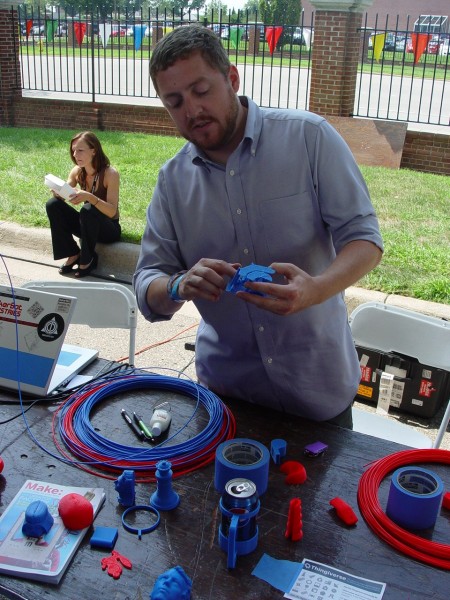 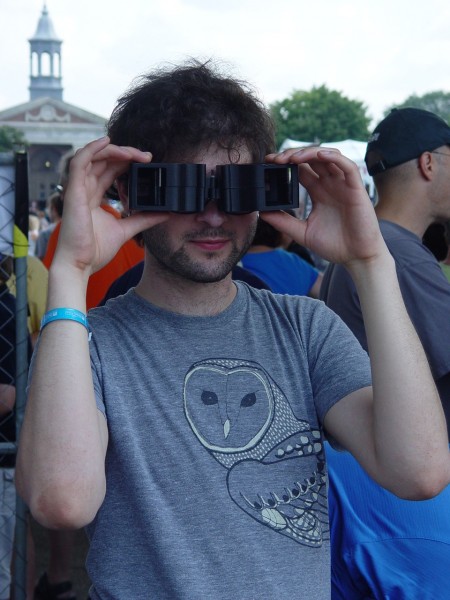 Tomer sports some CNC-made goggles.  I felt like I was wearing some crazy goggles, because Maker Faire was one awesome, surreal experience after the other.  See you there next year? 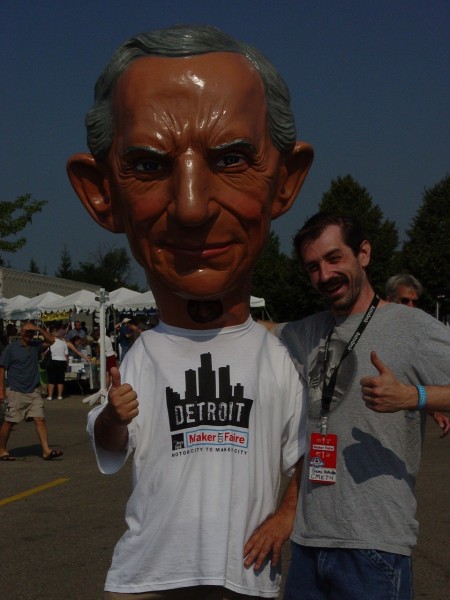 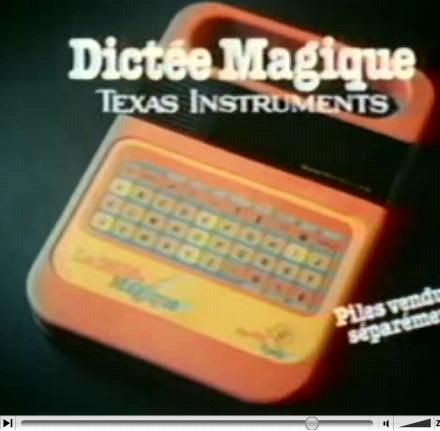 This creepy French ad for a Dictee Magique ( Dicta Magic? ) aka Texas Instruments Speak and Spell makes me want to cry and never ever touch that stupid machine. Telling me that I’m wrong in its cold cold robotic voice. Via Cyril of www.ana-r.org 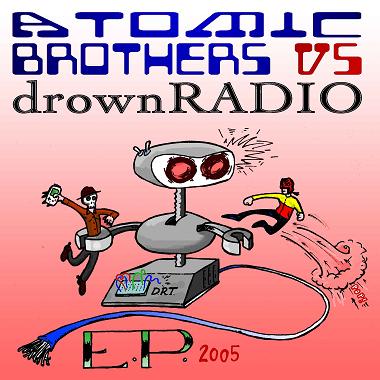 This Free Music Friday comes via Doc Pop’s newly redesigned blog Drown Radio. The Atomic Bros VS Drown Radio is an EP produced in 2005 for a Yo-Yo Contest and just now made available for free in a .rar file. Gameboy tracks with trumpets alternate to circuit bent noises and nerdcore. Download it now and give it to as many friends as you can, why? Well.. because its free and you just can. 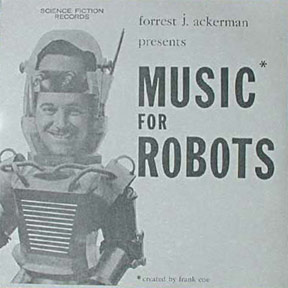