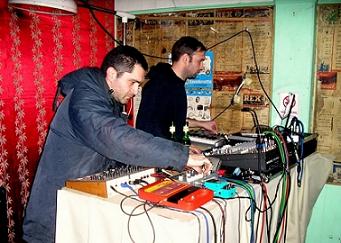 GetLoFi readers might remember an article called “Make Some Noise Italy” published a few months back. It was about Circo Bazooko, and their views on the Italian circuit bending movement. A lot has happened since the last time we got to really speak about things. I’m interested in finding out how things have changed for Circo Bazooko and where has the exposure taken them.

Q: It’s been about 4-6 months since your last interview with us. Where has the exposure from the article taken you?

CB: We are living an enthusiastic period! Things seem to move, maybe it’s only enthusiasm, but from our last interview with you some things happened. We spoke to a friend about organizing a Circuit Bending Workshop this winter and together with guys of “Etoile Filante” we are thinking about sponsoring for electronic stuff… nothing sure yet! 🙂 I’m bending some interesting toys that my brother brought from China. It is no easy because the chip is hidden by a black blob 🙂 …but now I have funny 8bit voices saying, “tortoise, oval, watermelon, teacher” in Chinese! LOL. Some guys called us for live shows and so we played interesting shows outdoors in our little city. Organized a “rock-free” party in a quarry (a very interesting natural amphitheatre were every summer and/or autumn people throw parties) we played till the morning. We were in London last week and we are working on future live shows in Milan, Barcelona and Ljubljana and other places in Slovenia/Croatia. People seem to be very interested about our music but especially in Circuit Bent stuff that we play.

Q: Cool…Sounds like a lot of fun! Seems like you are pretty busy. You say you played a show in London, England? Awesome! How did that come about and how were you recieved by those who came out to watch you?

CB: It was sweet. A French girl was at our show in Trieste (here in Italy, were Nacho and I live) she liked our performance and she spoke about us to her friend, a very nice Italian girl, who has a cafe in London. By a strange coincidence I knew this girl in Barcelona (Spain) some years ago! It was really awesome and she decided to call us to play in her coffee-shop for an Anniversary Party. The party was great! A lot of new inputs! Good vibes! LOL, People in London seem way enthusiastic, they feel like dancing and listening live music (it is very unusual here in north Italy). We will come back to London soon!!! Yes! 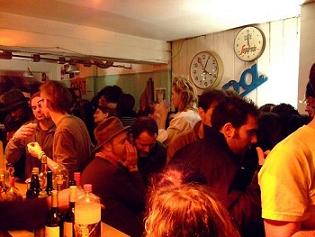 Q: Was there a big crowd in London?

CB: Oh! Yeeeees! It was sold-out! A lot of guys and girls dancing, finally! Dancing to every song that we played! Awesome! Oh yeah! It was a private party and we started playing at the beginning of the party…about 9:30 PM. There were not a lot of people yet, but we started with a dance improvisation by mixing deep-techno with circuit bending to make it sound more punk. Then suddenly the place was full of people as we got into our set…dance and noises, acid sounds, and atmospheres. A lot of fun! We stopped at 11:30 PM, but the party went on till 7:00 AM with some DJ playing Swing…a very disorienting coupling! LOL

Q: How was the audience reaction to your “bent gear”?

CB: People seem to be very amazed and amused, they enjoyed even the most common bend gear ever, the S&S! Maybe it was a flashback to their childhood. But the most interested person was a policeman at the Italian check-in: they thought that a toy of mine was a weapon. It was not important if it was made of golden plastic with sparkling lights in Taiwan. The policeman threw it into the garbage, directly. ROTFL! A fantascientific ( science fiction ) gun I think! Beware of fantascientific circuit bended guns! No problem getting our bent gear out of the U.K. 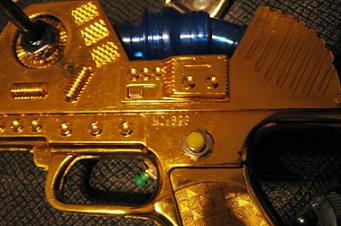 Q: What are you looking forward the most, now that things are moving along?

CB: How we usually say: the future projects of Circo Bazooko are to make a lot of money, move out to the country where we will cultivate sheep, raise carnivorous plants, and over clock clockwork orange…
Thanks Guys! Awesome to see that you guys are having fun!-Rodney.