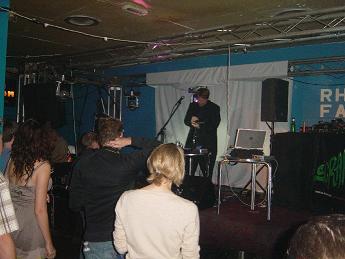 John from HighlyLiquid linked me to this interesting article about ‘Chip Tunes’ featured in the entertainment section of CNN.com. In one sentence circuit bending is mentioned by name:

“Chip Tune musicians often use a technique called ‘circuit bending’ which involves short-circuiting electrical devices causing the machine to create a sound which is then controlled by the musician.”

Thats nice, don’t get me wrong its cool that circuit bending is getting plugged by the mainstream media, which I am sure will drive the google hits. The entire article also seems to be very British in terms of only mentioning: BBC, Imogen Heap, Pixelh8, Sega Mega Drives, and Car Boot Sales. No mention of US artists or festivals like Blip. To their defense circuit bending and chip tunes are probably too broad of topics for dive into and may require extensive research to present in a just manner.
Another interesting quote:

“All these left for dead old dusty friends (computer consoles), wanted, needed and loved again. Chip Tunes has revived them all. “It’s very eco-friendly too in recycling, they are indeed doing they’re bit for the planet”.

Sure had to stick the buzzword “eco-friendly” in somewhere. I think its more like reusing, which much better for the environment and economically friendlier. The cheapness factor certainly cannot be ignored because it opens up the doors for many aspiring musicians who don’t have the money to spend on synth gear, however they do own a console or have access to one. Same thing with circuit bending, high-end gear does not appeal to benders because of the highly probable change that it will get damaged in the process.
Another good one:

“Despite the scene being in its infancy Pixelh8 is predicting big things and claims commercial success is not far away.”

Chiptunes have been around for ages, ever since computers could make noises people wrote music for them, once example is the Demo Scene. There have also been music programs for just about every console out there released by the manufacturer. Granted they didn’t boast MIDI capability in all the cases, but still you could make noises. Why does everything have to be commercially viable to be a success? Never mind its already too late thanks to Timbaland jacking your beats!

Some good reads on the subject include Chiptune Wiki and Circuit Bending Wiki. Thanks John.
CNN.com Link