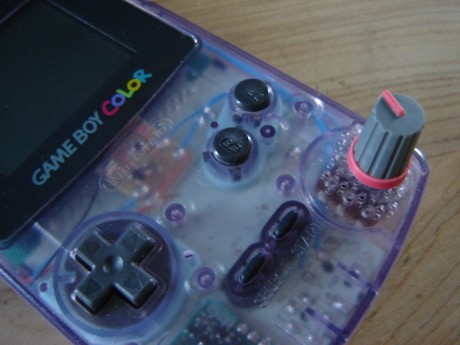 One of the most requested tutorials has been the installation of LTC Precision Oscillator in the Gameboy Color. The LTC module is a variable oscillator can control device’s CPU clock allowing for speeding up and slowing down the overall audio output with just a twist of a knob. 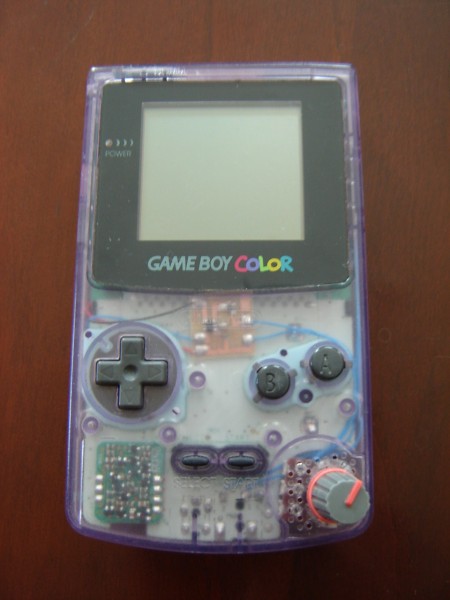 At first Gameboy Color seemed like a poor candidate for this procedure, but as it turns out there are several advantages for selecting it. GBC is much easier to obtain in decent condition than the original DMG-01 model. Secondly the LTC speed control does not seem to effect the screen refresh rate, everything remains perfectly readable unlike the DMG-01. Finally it is possible to install everything inside of the Gameboy Color including the Potentiometer.

To begin this process you will need a Gameboy Color ( thats been tested with batteries and is known to work ) and the LTC Precision Oscillator kit from GetLoFi. Start by opening up the Gameboy and disconnecting the flex cable from the board. Then desolder the speaker wires and remove the speaker. 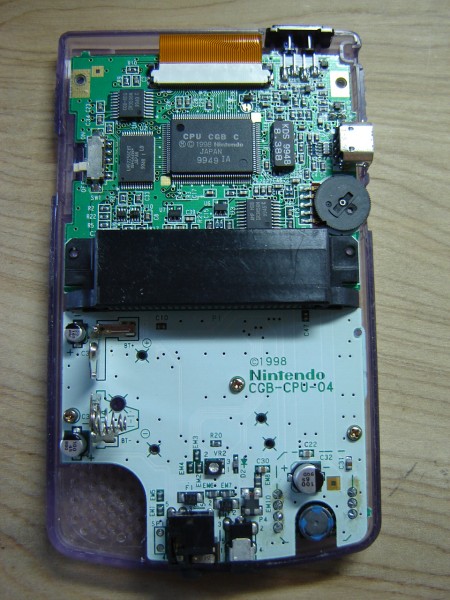 The biggest surprise is the fact that the speaker cavity is perfectly big enough to fit the potentiometer included with the kit. Mark the hole exactly as shown in the image below and begin to enlarge it until the threaded part of the potentiometer fits through. 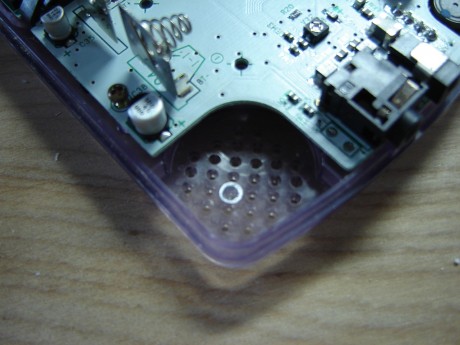 Please note that the legs of the Potentiometer would have to be bent backwards unless you want to shave away part of the plastic around the speaker cavity to fit them. You do not have to mount the potentiometer completely just yet, make sure it all fits and proceed to the next step. 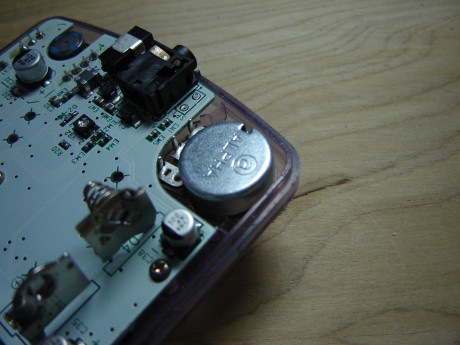 Now you can completely remove the circuit board and begin the installation of the LTC module. The included wires should be soldered to the LTC board first. Black will go to Ground and Red will be a Switched Positive source for +3 volts. The Blue wire next to that will be the Output of the LTC’s clock signal. The two blue wires on the top are for connecting the potentiometer. While you have the circuit board out, clean the buttons and the pads where they meet the circuit board with rubbing alcohol to remove any dirt build that up would effect the performance. 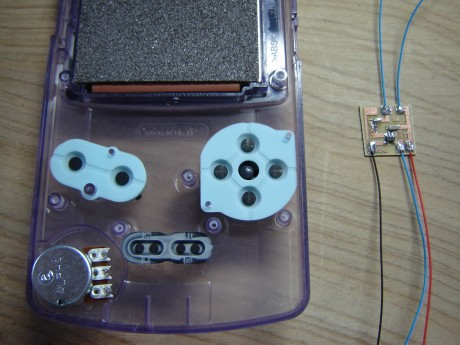 Please note that it is CRITICAL to do the Pro-Sound Modification on the Gameboy. In this case we are just using the extra blue wires included in the kit. Low-Gain’s website has a great tutorial for doing so and also the Kit Diagram should include further instructions. The amplified output on the Gameboy Color is extremely noisy and the LTC module will be heard through the jack. 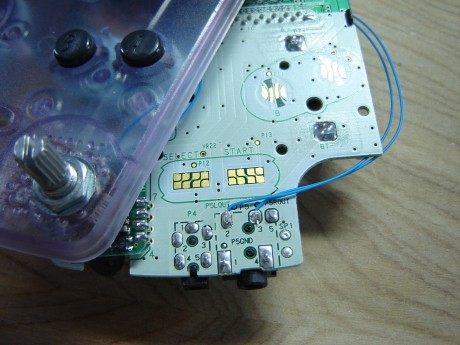 As far as placing the LTC module inside of the Gameboy, one appropriate location can be right in front between the Fire and the D-Pad buttons. Attach the two short blue wires to the potentiometer mounted in the case. Please note that because this was a first attempt with this my particular connection makes it so the knob pitches the device Down as it is turned Clockwise, you probably want that flipped around. If so just move these wires down so the middle wire becomes the bottom, and the top wire becomes the middle. Again the kit diagram should have all the correct placements. 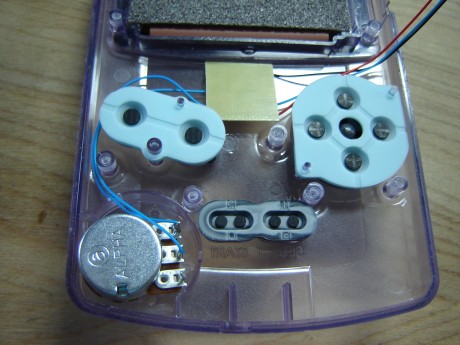 Now its time to connect the LCD ribbon and start closing this thing up. Make sure that your LTC connection wires come out on the right side of the board and flip around to the top side while avoiding having them squeezed by the circuit board once the screws are in. First we can connect the LTC module to the Clock Crystal on the GBC circuit board. The blue wire can be connected to either leg of the side that reads 8.388 on the crystal. If you are interested in having a Normal speed switch you can solder the included switch in the middle this same wire to simply disconnect the LTC module from the Crystal. At this point I am not sure where the best place to mount that switch in the case would actually be. 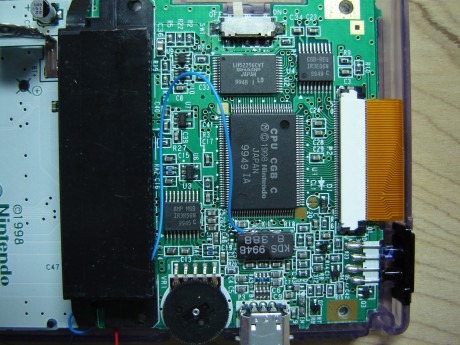 The LTC power connections can simply go to the Power slide switch. With Black wire attached to the metal part of the switch, and the Positive Red wire soldered to the second pin from the bottom. In this image you will also notice the two Pro-Sound bypass wires coming out from the Potentiometer for the volume control. The Pro-Sound modification also requires the removal of EM2, EM3, EM4 SMT components from the bottom part of the circuit board and the photo below clearly shows them as being gone. 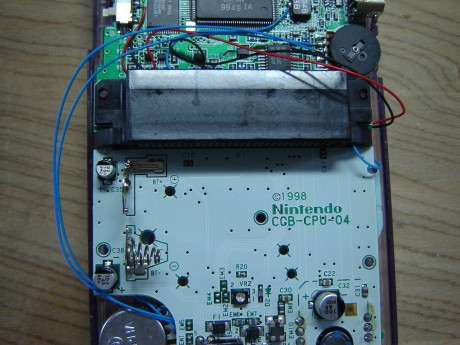 All wires should be tuck away rather nicely along the side of the case and under the Game cart connector. Reinstall all the circuit board screws and reapply the back case. At this point you can insert the batteries and test the Gameboy and make sure that the Modification is functioning correctly. Note that you will not hear the Gameboy unless you have it plugged into an external amplified speaker or a mixer because the internal speaker was removed. The knob should give you a nice smooth speed control and everything should pitch up and down without crashing. If there seems to be a problem, double check that all your connections look the same as the photos or the diagram. Try disconnecting the LTC module then check your power wires going to the module. 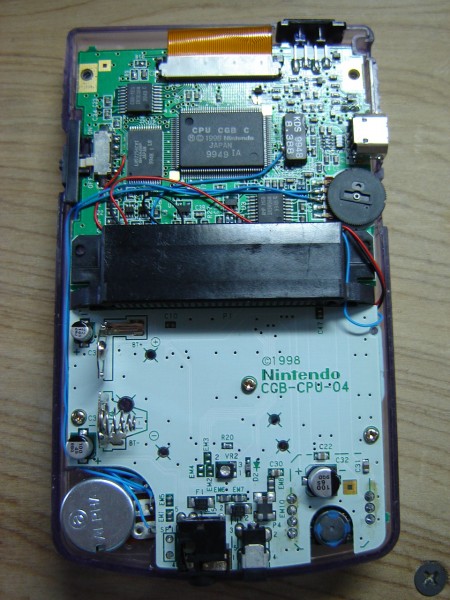 These certainly can be more improvements to this method and in the future we’ll have an excelent diagram to illustrate this modification accomodating the Kit. Revisions most likely will follow and your comments and user builds are as welcome as always! Enjoy.