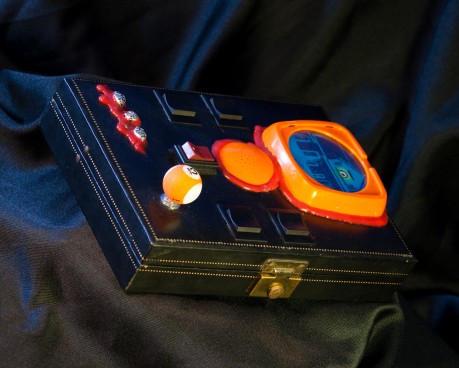 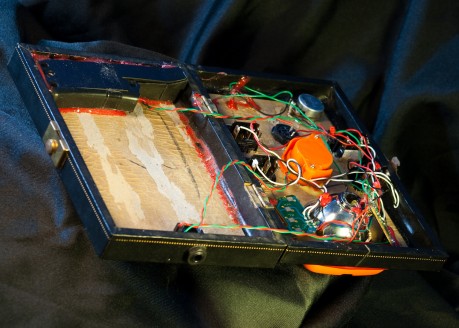 So, I am in my first rock band and it is my pleasure and privilege to be able to share this with GetLofi Readers. It consists of myself on drums/circuit-bent electronics, Jeff Cox on acoustic guitar/bass and Zach Adams on guitar/synthesizers. Here is a video from our first performance at the House Cafe, in DeKalb, IL:

In a recent GetLofi article, Spunky Toofers compared single circuit-bent devices to patches on a modular synthesizer.  I think it’s an apt comparison.  Despite the inconvenience of lugging around a gigantic array of devices, there is something to be said for the visual appeal of a table crowded with beautiful, weird-looking/-sounding gizmos.  Let us not discount either the incredibly unique sounds within some simpler devices.  I have found that performing solo has become an interesting puzzle when faced with a dozen or so instruments, all with different interfaces and sound potential, all able to make noise at the same time.

For CMKT 4, I have added plywood wings to a student desk and done away with rack toms to accommodate some choice pieces of my circuit-bent gear as I drum.  I am currently using the Sesame Street All-Star Band Keyboard, The Animal Caller, The Bird Calendar, the Barbietron (coming soon), and a new device, the Haunted House, to get my palette of circuit-bent sounds.

I picked up a Halloween flashlight loaded with spooky sounds when I last was in Chicago.  Tommy from Roth Mobot had picked up one before when we were both at an American Science and Surplus months back, so I was familiar with the sounds and was pretty sure that he had circuit-bent it later.  I quickly dismantled it and found a pitch resistor.  What is amazing about this flashlight, musically speaking, is that it already drones on its own.   There are 8 sounds to choose from, each loops automatically until you press its button again or select a different sound.  This was probably my simplest and quickest project to date, it came together pretty fast over several days.

My only modifications were to the flashlight’s housing and pitch resistor.  The body contacts are metal beads from Michael’s, the case was a junky jewelry box from Salvation Army and the Haunted House illustration is actually cut from the cover of a garage sale book, “Haunted Houses.”  I was able to cut the flashlight lamp front flat with a Dremel cut-off disc chucked in my drill-press to turn it into the front window on the final instrument.  By doing this, it sat flush on the front of the jewelry box and I was able to use the flashlight’s own screws to affix it.  I replaced the flashlight bulb with an LED, transplanted its battery compartment, and replaced its buttons with some nice chunky black plastic DPDT switches.

As soon as I brought it to practice, it fit right in;  there are 3 different songs I use it for now.  It just goes to show that sometimes incredibly simple bends can sometimes result in very capable and good sounding instruments.

Also, CMKT 4 is coming for you, Minnesota!