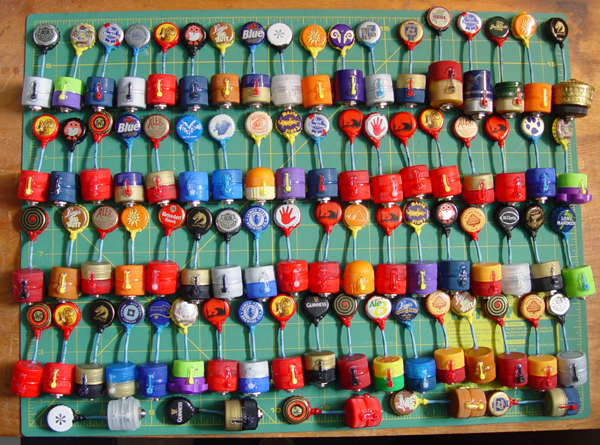 So, I have just finished Batch #3 of Creme DeMentia Bottle-Cap Contact Microphones. Since winter, I have been going out once a week or more on recycling days and gathering caps from people’s recycling bins. My friends collect caps for me and I have found myself drinking beers and sodas more on the merit of their caps than their flavor. I have sampled numerous regional and obscure sodas and beers to find new and interesting raw materials. My cap collection has become quite large and varied; as a result, I have become a little more playful with my designs this time around. You’ll notice a number of one-of-a-kind and non-uniform designs.

Here are the new designs:

If you place an order soon, you’ll receive one of the above varieties. Prices include First Class shipping to ANYWHERE IN THE WORLD. I have shipped to all over Europe, Canada, and the United States. There are no additional shipping charges to calculate, $15 for one, $65 for 6, plain and simple. Order now at www.getlofi.com/shop.

I’m going to take some of the more special microphones and auction them through eBay, starting with this design: 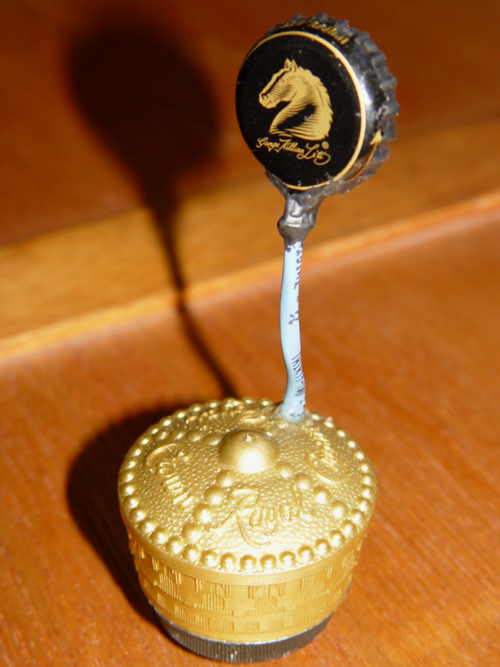 Currently up for auction on eBay.

I recently attended an event in Rockford, IL, at a store called Just Goods. The event was called the Handmade Musical Instrument Exhibition and it brought together a number of local artists who make their own musical instruments. I attended thinking that I might meet some local, interesting, like-minded individuals and possibly sell some contact microphones; I was correct on both counts. I first met Paul Bourgeouis and Evan Clayburg, who both had made electronic instruments. Paul’s instruments were different variations on 555 and Hex Schmidt Trigger Oscillator Circuits. They made some very beautiful noises. Evan had assembled his instrument from an online sequencing kit and he had a CdS cell controller mounted in a rubber octopus hooked to the bare circuit board.

I also met David Stocker and Jim Worland, who were the main forces behind organizing the event. Jim Worland is a luthier who builds fantastic custom acoustic and electric guitars, some with added harp strings. David makes drums, ocarinas and other instruments from found and bought materials; he is an Illinois Artist in Residence and teaches workshops on building these instruments. 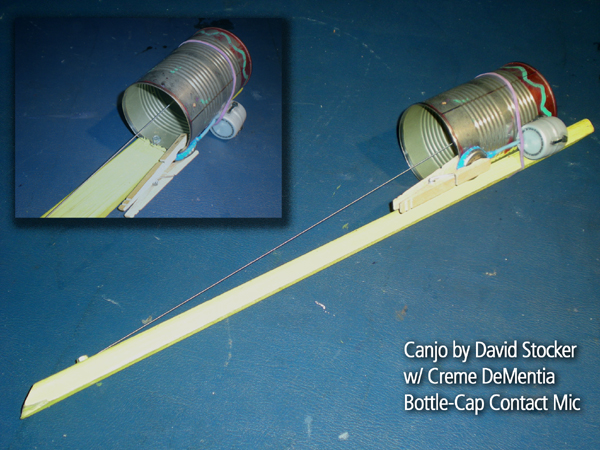 I traded David a couple of contact microphones for a device he makes that he calls a Canjo. The Canjo is your standard soup can screwed to a rigid stick. A guitar string is strung through a hole in the bottom of the can at one end of the stick and the string is bolted at the other end of the stick. By strumming the string and manipulating the can, you can produce some nice, springy melodies. When I got together with Alex and Patrick recently, we spent an evening playing the Canjo through one of my contact microphones and a Getlofi Fuzz Pedal; it sounded great!

I recently saw Pixar’s Wall-E for the first time. Though I enjoyed the movie, probably the most rewarding viewing experience on the DVD was in the Bonus Features – Animation Sound Design: Building Worlds From The Sound Up. This short documentary explores some of the techniques that legendary sound designer Ben Burtt (Star Wars) has used to create sound. It explores not only his harvesting of sounds, such as striking contact-mic’ed Slinkies and high tension wires to get laser-like sounds, but also his manipulation of sounds through unique software interfaces. The following video explores some of the same material, but the actual bonus feature on the DVD is much more thorough.

Particularly interesting to me in this documentary were the sound contraptions designed by Jimmy MacDonald for Disney in the 1930’s, 1940’s and 1950’s (which is not in the Youtube video). Disney studios first used musical instruments to produce sound effects, such as cymbal crashes for impact sounds and flute whooshes for cartoon characters flying through the air. This was because recording equipment of that age was too bulky to be portable and editing was laborious. Instead, artists would gather with their instruments and match their performances live to on-screen images in a large studio, where the recording equipment resided, reducing the need for editing. This method of scoring cartoons led to the creation of these noise instruments that could be controlled by a person or persons in the studio to create live sound effects performances, such as draw bridge chains rattling, bees buzzing, cartoon engines sputtering to life, rain, thunder, wind, and voices of mechanical-type characters. This documentary has a lot of archival footage of these devices and techniques being demonstrated and it makes for fascinating watching. Some of these devices are still stored and used at Disney Studios today and Ben Burtt used some of these devices in creating the sound universe of Wall-E. Definitely inspiring viewing for anyone who is thinking about making some of their own experimental acoustic instruments, perhaps to use with their very own Creme DeMentia Bottle-Cap Contact Microphones.