Greetings all you people out there in Internet Land! This is Austin, aka Creme Dementia, and this is the first of hopefully many posts that I will be making for GetLoFi.com. I’ve been circuit bending for about 3 years now and this is probably completed project #12 or so. I was introduced to bending by Patrick of Roth Mobot, while living in Chicago, and through him I have met many other benders. Daniel, aka Spunky Toofers, inspired me to start tackling obscure toys, ones that I haven’t seen bent much or that are just pretty whacked-out to begin with. The Sesame Street Keyboard is a good example of a pretty “whacked-out to begin with” toy, and the bends that I have found make for a lot of fun with the toy. I have come across 2 of these toys in my thrifty adventures; with the help of a third from eBay, I was able to Frankenstein-together the finished result you see. If you take the precautions I list in step 1 and solder quickly, I think you will probably only require 1 of these toys to bend it as I have.

I wrote this in a step-by-step manner in an attempt to make it accessible to beginners and pros alike. If it’s TMI, so be it, it’s better then TLI. My custom paint-job was done by splashing red nail-polish across the surface and adding several coats of clear-coat (I masked off the “On” button and keys with masking tape and newspaper). I did the eyes on the Sesame Street Characters in a similar manner with white nail-polish, markers and clear-coat. To mount the PCB buttons, I made a paper template and marked and drilled the holes for each leg for each button. I then soldered two leads to each, fed the leads and the legs into the holes, and put a dab of JB Quik Weld epoxy putty under each button to hold it on securely. Otherwise, this is all pretty simple, save for de-soldering. I’m sure you could creatively skirt having to desolder anything in this project, but I found it made things easier for me. I enjoy desoldering and its a good skill to learn if you haven’t yet. Treat yourself to a desoldering pump, it’s a great gadget to have around.

Alright, so here we go: 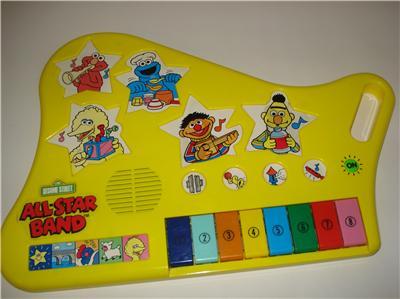 1) Before you open the toy, here is a list of some key precautions and some notes on my bends; read these instructions thoroughly before you get started. There are two shorter screws in the outer case, those go in below the numbered rainbow keys. A good way to hold onto your screws, as taught to me by Patrick of Roth Mobot, is to stick them to the toy’s internal speaker, but I’d get a container for them if you plan to have the toy open for any more than a day.

There are several ribbon wires and plastic membranes with printed traces inside the toy, be very careful not to bend or break these, as they could easily disable the buttons. I went through 3 of these toys before coming out with the finished product, and I think one the problem I encountered may have been from unknowingly breaking one of the wires in the ribbon wire. I encountered a membrane breakage in another toy, the Alphabet Pal (Fuckapede… see my MySpace page. Also, I do not give specific capacitor values for the last bend in these instructions; the values you could choose are rather open-ended. You’ll want to either experiment with a capacitor substitution box to find the values you want or experiment with capacitors that you have on hand. All the values I used were below .22 uF. Also, there is an auxiliary battery compartment with button cell batteries under the main circuit board. I removed these batteries and the leads traveling to it; I assume they were put there to power the toy at the point of purchase. When you load in AA batteries, the batteries push open a switch that breaks the connection to these auxiliary batteries, which are left to rot inside the toy. Most likely they are dead, as this toy is from the early 90s. Test them for charge and dispose of them properly if they are dead. Don’t just throw out those batteries, collect them and give them to the Lion’s Club or Radio Shack or Walgreens or the Fire Department or SOMEONE for proper disposal. 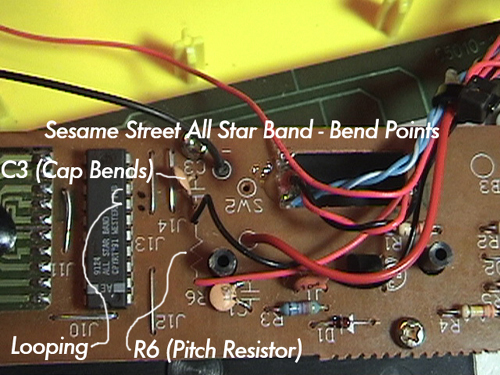 Solder leads to pins 13 and 14 on the Sesame Street All Star Band 9124 Chip. Connecting these points will give you looping sounds. I wired a toggle and push button switch in parallel which would connect these two leads through a 47 ohm resistor, so that you can audition and hold loops.

I used solid core CAT5 strands to solder to the chip; they solder quickly. Quick soldering is key to avoid overheating and damaging the chip, which may also have been the culprit behind the problems I encountered in my first attempts at bending the toy. 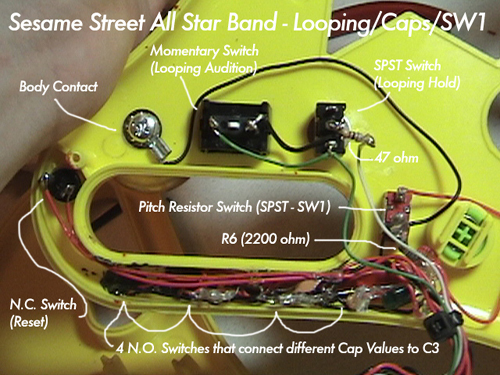 My Control layout inside the SSASB Handle – It’s about the most open space you can find inside the toy.

Desolder R6 from the SSASB Keyboard circuit board and retain it. Solder a wire lead to the remaining hole where R6 connected directly to C3. Connect a second lead to the loose end of this lead. Mount an on-off-on switch (SW1) in the case and solder the joint of these two leads to the middle terminal. Mount a body contact in the case and solder the remaining lead to it.

Attach the desoldered R6 to one of the outer terminals of SW1, and solder 2 wire leads to the other end of R6. One of these leads will connect back to the SSASB keyboard, soldered into the other remaining hole where R6 had been removed. The loose lead will connect in the next step. 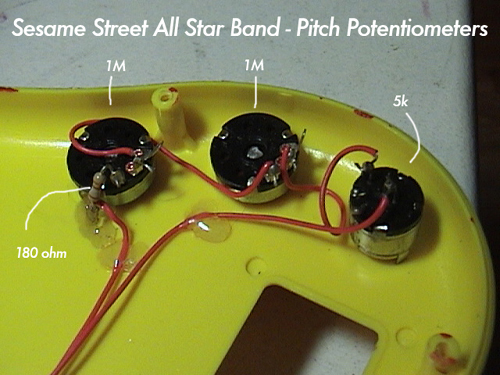 7) Cut the positive lead from the AA battery compartment and add a reset switch (the looping can get crashy). Add an output and possibly a speaker switch and you are all done: 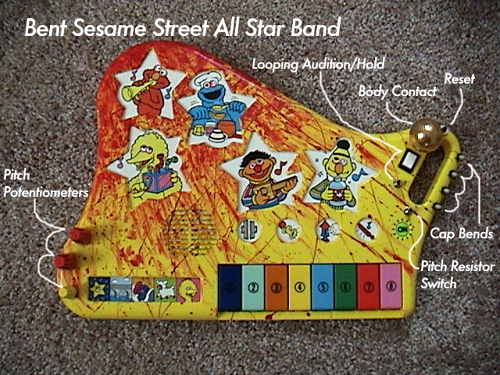 SW1 will give you three modes, Normal, Pitch Controlled, and Open. Normal mode is when you route it through the pole that R6 is soldered to. Flip it that way and turn the toy on. Press a sound, and during that sound, move it to “Open” (off). This will give you a long stream of noise that will last for quite some time. Move it to the last position, Pitch Controlled. Turn the 1M potentiometers so that they are at 0 ohms, move the 5K potentiometer to center and it should sound about normal. The 5K potentiometer will give you pitch control over the sounds above and below its normal pitch range, while retaining the integrity of the original sounds. As you add more resistance with the 1M potentiometers, it will get that shimmery quality of the noise stream caused by breaking the pitch circuit in “Open” position. While the toy is making a noise, hold down the looping button. If the sound starts looping, you can lock it on with the looping switch. Play with the controls in tandem, there’s quite a vast sonic range.

PLEASE, use this is as a jumping-off point and experiment, you might find a preferred layout or different control options.

The draw to me for this toy was its strange appearance and all its great factory tones, its easy dis-assembly and the fact that it’s made by Golden. More on that later. Thanks for reading, I will hopefully have some video of my bent toy for you to enjoy soon.