Greetings LoFiers! Tommy from Roth Mobot supplied me with a dupe of a toy I’ve bent before, the RY-1286T Protech Drum Toy. Tommy has the best toys.

I’m very fond of the Protech Drum Toy (or the “RY-1286T” if you read it’s most likely peeling label on the back), and it has special significance for me, as it was the first toy that I ever circuit-bent. With instruction from Patrick from Roth Mobot at a free workshop in 2005, I was able to find and figure out how to wire a pitch bend and a noise/buzz bend. Thus was born the Drum Invader, and it remains one of my favorite projects to this day, here it is in action:

The toy pretty much looks like this when it’s not bent, minus anything silver on the outside you see in the video. There are no star stickers, either

Here’s a picture of the circuit board of the Protech Drum Toy that I bent. It’s followed by a schematic drawing of my bends, and an explanation of these bends. 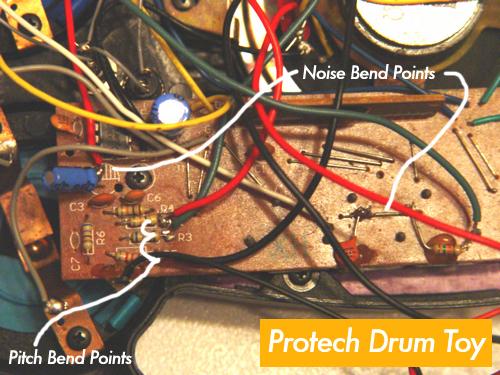 A nice pitch sweep can be attained by soldering a 1M potentiometer in the configuration shown, using leads from the right sides of resistors R3 (center lug), R1, and R5. Nicely responsive body contacts can be installed using those same points. What really makes this toy sing, though, is the noise/buzz bend. By connecting the top (-) leg of C3 to J7 on the board, you get a loud buzz. By varying the components between these two points, you can control the timbre and volume of the buzz. I used a 15k resistor and a 473 capacitor to get two different buzzes. Try some other components! These buzzes are, for some reason, affected by the pitch bends. This essentially gives you two different wave forms that are pitch-controlled by the potentiometer and body contacts. The most interesting tones result from masking the the drum tones with these noise bends; the rhythms created by the toy “modulate” (not sure if this is the correct term, but you get the idea) the buzzes, creating rhythmic buzz “melodies” out of the drum beats. 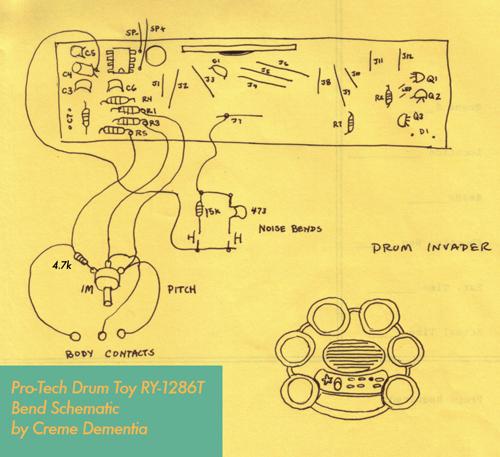 So, you may ask, why am I re-opening this toy now? For starters, some joints were poorly soldered and it’s beaten up from touring. Also, despite its excellent bending potential, this isn’t the most well-designed toy on its own; the small buttons that allow you to record patterns for playback and select rhythms and drum pages have a tendency to stick down and the on/off switch has a tendency to get really staticy. I think it’s ripe for a re-house and I think I may do the both of them simultaneously, creating one Amalgam of the two toys. So, why not document my progress for all you happy people?