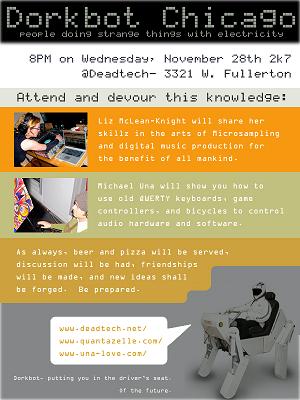 Liz McLean-Knight and Mike Una will be presenting at Dorkbot this month, which falls on Wednesday, November 28th ( Tomorrow ). As always, it will take place at the excellent Deadtech, 3321 W. Fullerton Ave. in Chicago, USA.

Here’s what you’ll see:
A self-proclaimed “multi-hyphenate,” Liz McLean Knight–the sole woman behind Quantazelle–is thoroughly immersed in technology, fashion, music, and the often-surprising overlaps between. She will be demonstrating and discussing the art of “micro-sampling” and other swell digital music production techniques. Once she gets going, this whole thing might turn into a dance party.

In addition to the knowledge, beer and pizza will be served. Yum Yum. Those who can’t make it, don’t panic. The event will be caught and released into the interewebs.