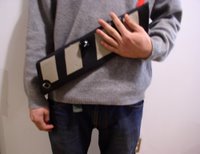 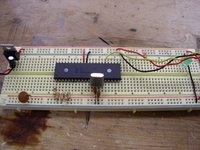 This device comes via the original post on We Make Money Not Art. I guess today is the day of cross posting for me. However being interested in microcontrollers and their MIDI applications I felt that this was worthy of a mention. Wearable drum machines and synthesizers are nothing new. However trying to incorporate them in to clothes is finally within our grasp. Just imagine someday everyone will be able to jam out while riding the bus, or sitting on the subway train. Lets just hope that people use headphones otherwise it will be a nightmare. Anyways there a a couple of things that are pretty interesting about this. First its the code that sends the MIDI notes to the computer. Located here. From the code, I gather that the bank selection is done via a resistor array. The decimal to base 2 conversion appears to be done automatically by the microcontroller, which is a plus. So “hserout [144, noteVar[0], 127]” is something like 10010000,1001,1111111 ( rough guestimate ), which a MIDI interface will read and convert to Channel 1 Middle A, Middle velocity. Pretty neat, IMO. The second cool tip that I gathered was the use of FSR, Force Sensing Resistors. A piezo element solution would’ve obviously not worked in this case because of not enough voltage being generated from the pressure of the fingers. If this were an acoustic drum trigger that would’ve been a different story. Anyways enjoy the link.
[Via We Make Money Not Art]