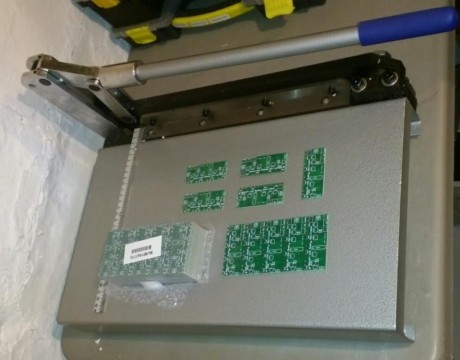 New PCBs for the GetLoFi Quad Oscillator Kit have arrived, however that is not the end of the story, just the beginning. At one point I figured out that there is a magic ratio between the board area and the cost of the production run. As it turns out it is cheaper to produce larger boards than smaller sized ones, go figure! Its not merely the surface area but the number of cuts that plays into the over all cost driving up the complexity of the job and the price with it. Some PCB houses will also not make boards that are below a certain size. What is a small hobby business person to do? The answer came from Circuit Specialists in a giant heavy box filled with Styrofoam containing  a Professional PCB Cutter.

Now this might seem like an over kill but in the initial run this tool helped to bring costs down by over 55% and that is factoring in the price of the cutter into the total production cost. Subsequent runs will receive perpetual cost saving benefits from the increase in our control over the means of production.

The downside is obviously one more step in the kit assembly process, cutting of the PCBs into smaller boards, but with the right tool this job becomes a SNAP requiring only remedial manual labor. Reminding us of that age old saying, ” We Work Hard to Pass the Savings on to You!”