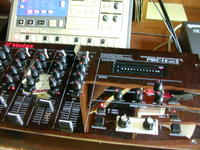 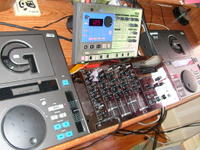 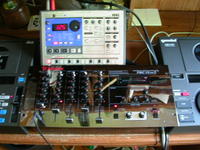 The main thing I got accomplished over the weekend was fixing a Vestax mixer I had laying around for over years now. First off I thought it was a bad power supply and after testing all the voltage regulators on the board I found out that one of them was actually a Negative voltage one, 7909 instead of 7809 ( positive ) this meant that the board actually needed an AC power supply not a DC one. So after getting the right power supply things powered up right. It turned out that the faders on that mixer were beatup to shit. Solder points were busted on the board so after resoldering some and fixing a few connections all the channel ones were good to go. The cross-fader was a different story, it was fucked. I guess all that a crossfader really does is provide resistance between the two assigned stereo channels. Making do with what I had I simply removed the cross fader and replaced it with two 1meg Pots.
Hah! Take that! Now I can cross fade between Left and Right channels.
The mixer works very well actually with my CDJs and the EA-1 setup. My first mix was recorded sunday and I’ll upload it sometime very soon. I guess the next step is modding the pitch on the CDJs the +/- 12% doesn’t really cut it.

Here are some shots of the setup I got going on.