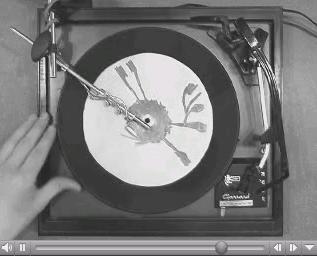 Caleb has recently posted a video of a graphite turntable sequencer demonstrating the conductive properties of graphite aka pencil lead. The technique of controlling an oscillator though the graphite resistance has long been known and demonstrated in publications by Forest Mims and Nic Collins. However, in this case Caled used graphite on a circular piece of paper placed on a rotating turntable creating a loopable sequence of bleeps. A specially rigged up tonearm with spaced contacts is used for controlling the 555 oscillator by reading the resistance from center of the record to the drawn out note branches. The 555 is not the only circuit that can be controlled. For instance any black blob noisemaker with a pitch resistor can be re-routed by extending the pitch resistor wires to hook up with a similar graphite device for loopy modulation control. Nice proof of concept that really gives “spinning” a whole new meaning. Imagine DJs drawing their cuts right before they have to mix them in! I’d go see that fo’sho! Thanks Caleb. 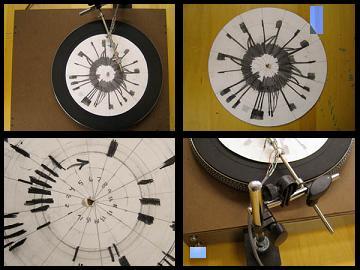 *Update* Caleb has posted more videos of the player in action to his blog.