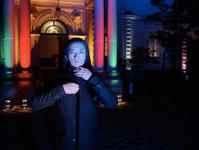 Well I got the forementioned issue of the Grooves magazine with the picture of a bent speak and spell on the cover. It is true that there are no mentions of Circuit Bent gear persay in the entire magazine. However there is an ad for Orgy Of Noise CDs and a brief description of the cover photo referring to Ghazala and also Bill T Miller of circuitbending.com, I wonder if he is related to Brian Miller the Art Director of Grooves. Anyways the big story which ties into the Circuit Bending realm I guess is the write up on Merzbow aka Masami Akita. One thing that I learned about Merzbow is that Masami has managed to release more albums then the delayed Wesley Willis ( Over 500 to mere 50 ).
Decent article with no real insight into anything except that people don’t dig his laptop based stuff as much as hardware analog noises and there is a new Merz album out. The images of Masami in the article can be found on google without any effort. No links to free music or anything. Great writeup about Wesley can be found here though http://www.monzy.org/wesley/