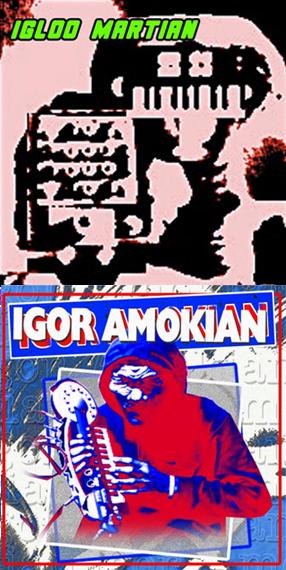 Last night I finally got around to listening to LA’s Igor Amokian and LaCrosse’s own Igloo Martian split in its entirety without interruptions and with headphones on. Very nice to say the least, refreshing sounds arranged in compositional form. The efforts of both musicians are apparent in their instrument choices as well as their recording work. The split is available now on TigerClaw Records’ website. For your listening presure I recorded a ten minute sampler mix skipping around the CD. Enjoy.
igor-amokian-igloo-martian-split-mix.mp3

This is DATURA 1.0’s Review on the split…

How you might enjoy this new split disc from Tiger Claw records might just depend on how you personally like your bizzare electronic music served up. On the more chaotic side we have the improvisational feeling of the tracks presented by Igor Amokian. At times fast rythmic cuts of harsh tone bursts and squiggly bent toy samples approach an almost breakcore like beat structure, but for the most part the tracks seem to hold together almost despite themselves, the ear struggles to make structure from the chaos, patterns repeat for only so long, then disappear forever, replaced by a new short-lived repetition. Often this shifting of elements is occuring on more than one level at a time, odd out of context guitar samples and incongruous language snippets suddenly rise up from the gizmonic disharmony and are swallowed up again as the tide of sounds surges forward to it’s conclusion. I like it. But then again, I like chaotic incongruous noise. If the Igor Amokian portion of the disk represents chaos evolving into structure, then the Igloo Martian portion could be said to represent structure derived from chaos. For the most part the tracks here have a more traditional song structure, albeit derived from fucked-up toy samples. The effect of these oddly jaunty bent toy jingles rythmically competing and working together to create a song can be quite, well, spooky somehow. Like haunted neglected toys come back from beyond to extract revenge on their owner. Much of the work here is like that, except for several notable exceptions at the end where instead of weird snappy melodies, the anchor point of the song is huge oceans of static-y noise drone with the bent toys surfacing and diving like swimmers in a sea of sound. I like it quite a lot. But then again, I like haunted toys and oceans of static-y noise.