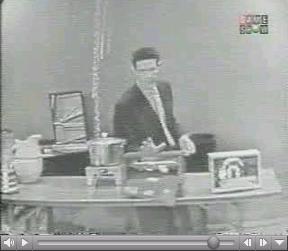 Fabio sent me this awesome video of young John Cage performing on “I’ve Got a Secret” TV show, which also appeared on the BeepGlitch Blog. John Cage put on an amazing Live Musique Concrete performance reaffirming the fact that dispite being made in a studio his music way more fun and entertaining when watched being performed live. I had the same feeling during all of the performances at the Bent Fest this year, listening to recordings of past sets that people did was not reflective of the Live experience, being there is key. Too bad they couldn’t get John Cage’s radios plugged in because of a Union dispute, just another way that beuracracy gets in the way of Art and Expression.