by Austin
I’ve had a Gameboy sitting around for a bit now, a nice, clean one I picked up at St. Vincent De Paul’s for $5.  I wanted to add an LTC module and Pro Sound Mod to the Gameboy as a gift for my friend, Gary, who is one half of the team that brings you the Podcast Watch Out For Fireballs.  I found the soldering to be simple, but met some other unexpected challenges – I hope seeing my process will help you readers out there who have a Gameboy slated for modding to better plan your project.

To get started, I had to open up the Gameboy, which ended up taking much longer than I anticipated.  When I turned it over to get at the screws, I noticed it had proprietary 3-notch screws keeping the halves together.  I would recommend either investing in a screwdriver that would fit these or you can do what I ended up doing:  drilling off the screw heads at the drill press.  Drill carefully and only as far as you must;  the screws connect to plastic posts in the front half of the Gameboy and only one screw was still long enough for me to grab it after drilling.  I backed it out with a pair of needle-nose pliers, then ground down the remaining plastic posts just enough to grab and twist out the other screw shafts.  This was tedious, but had I bit the bullet and gone straight to drilling it would have been faster.  Luckily, the Gameboy still fit together fine, even with the shortened posts.
One thing I would recommend is considering Getlofi’s specialty Gameboy LTC Pitch Modification kit which includes a space-conscious on-off switch.  That said, the inside of the Gameboy is what I refer to as a “Space Nightmare.”  No, Kthulu isn’t in there, it’s just a tight fit for putting more components inside.  There is barely a 1/2″ wide column of space to work with going up half the right side from the bottom to use. 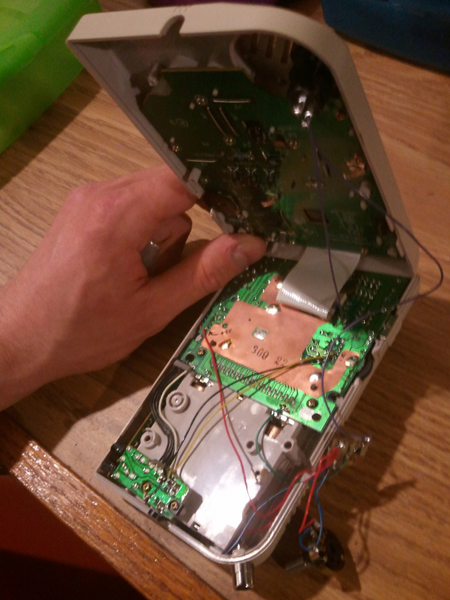 I wanted to use a push-on/push-off latching button in the front to connect/disconnect the LTC signal for aesthetics/usability, which was the first thing I decided to tackle.  Hindsight is 20/20 and I would recommend leaving this operation for last, as it is the only thing aside from the screen ribbon cable that connects the two halves of the Gameboy, once open.  Because I did it first, I had to contend with the button wires during the rest of my wiring, which was annoying.  The ribbon cable can be carefully removed by hand.  Be gentle, because damaging the leads will affect the display.  I also had to route out some of the battery compartment for the button to be able to fit in place.  If you choose to mount the button like I did, be careful when widening your pilot hole in the front of the Gameboy, I ended up chipping the Gameboy’s case where it is slit for the (removed) speaker – opt for using your Dremel rather than your tapered reamer to widen your pilot hole.
Getting the LTC’s potentiometer to fit inside was not too hard, though I did have to grind away the side of one of the plastic screw posts for space.  The LTC module itself tucks nicely under the bottom half’s circuit board.  I decided to attach wires to the LTC board instead of directly attaching it to the potentiometer.  The LTC board tucks under the Gameboy’s board neatly, loose but blocked in place by the potentiometer.  I ran wires in parallel to the potentiometer leads to the RCA jack at the bottom to control the LTC remotely.  I did have to trim off a little bit of the RCA jack’s tip lug for the fit.  I would recommend gluing the RCA jack in place inside, they can tend to twist around. 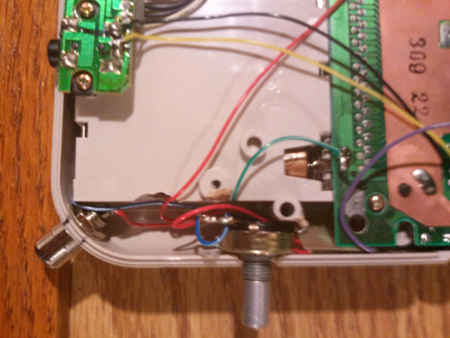 When it came time to put the Gameboy back together, I noticed that there were threaded metal nuts embedded in the screw-holes in the back half of the Gameboy.  This is so that only screws with the correct threads can fit. I tried to find properly threaded screws at my local hardware store, but that didn’t work out – they are super small.  I carefully drilled these nuts out with a slightly larger drillbit, taking care not to damage the circuit board, then screwed the Gameboy back together using screws from my tiny screw collection. Once again my jar of tiny screws comes to the rescue – junk toys can end up yielding a lot of these helpful little guys and other handy components.  Skip the hardware store and go to the drill press, they won’t have the right screws any way. 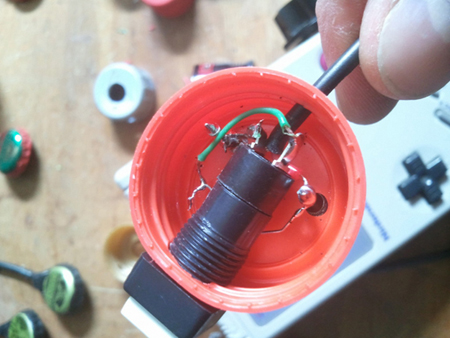 Lastly I assembled a remote controller for the LTC in a bottle-cap.  I added a latching on/off switch for the Photocell and two body contacts, both of which are wired in parallel with the on-board potentiometer using an RCA cable to fit the jack I installed.   I ended up with a messy hot-glue job at first, because I had forgotten I had turned my glue gun to low.  I redid the hot glue finish by gingerly zapping it with a heat gun, taking care not to melt the cap – nice and smooth. 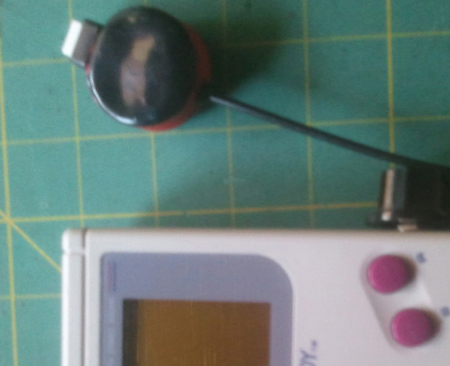 It came together over a couple of days, though there was a lot of sitting and thinking before acting.  Hasty screw-drilling can be a set-back some times, but I would highly recommend it in the case of the Gameboy.  Also, speaking of drilling, make sure you clean all of the metal and plastic dust out of your Gameboy before reassembling, especially from behind the screen.  I did so by carefully removing the front circuit board and using a little canned air.  Also, protect your screen from getting scratched while you work by putting a piece of tape or a sticky note over the front it – something I forgot to do. 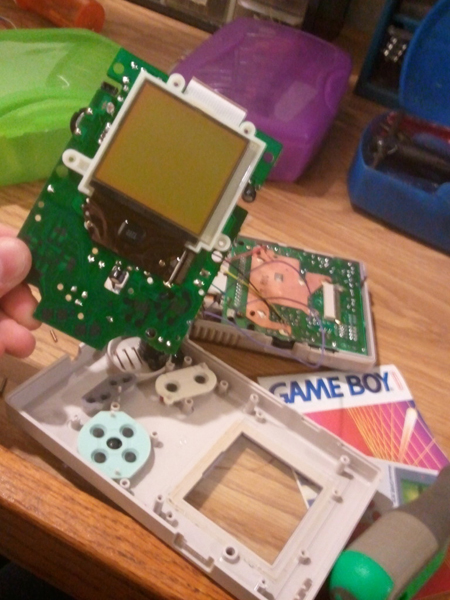 I hope these tips helped you plan your project, I know I learned a few things in making it.  To help keep you entertained while soldering up your Gameboy, why not check out Watch Out For Fireballs?  WOFF is my friend Gary’s podcast which reviews retro video games for your amusement!  In other news, CMKT 4 is about to head out West for the Bay Area Maker Faire with a string of workshops, stay tuned for details!