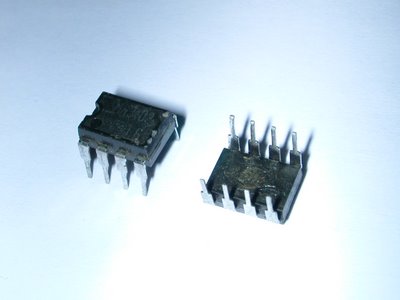 It looks like HongKongSuperSeller is not as legit as originally thought according to some soources. The items in question are their BBD MN3207 ICs being labeled NEW. I have not paid any attention to this, but mine are all mix and match with scuffs, uneven legs, and some even having dirt on them. Some buyers however reported prestine condition of ICs. It is also alledged that HKSS is recycling these chips from old Karaoke machines with little children sand papering the parts to make them look new in this post by ChipforBrains on Nabble. Another big thing is re-labelling ICs, like taking 1024 stage BBDs and making then look like much more expensive 4096 stage ones. This was reported by Dieter Doepfer whom ironically was ripped off by a different company cause they heard bad things about HKSS. The company did appologize and claimed that they did not know about the refurbished parts. Some of HKSS’ auctions say Authentic and Original with the condition set to NEW, however the parts are not always that. Upon closer inspection mine had grime, bent pins, and scratches as seen in the above closeup. They could have very well been recycled from old PCBs for all I know or discarded as trash. Chipforbrains seller whom is also located in Hong Kong had quite a rant calling HKSS a “Mafia run organization“. The English in the message is choppy however its a very interesting and thought provoking read about the Counterfeit IC market catering to the DIY community. Being the paranoid conspiracy master that I am, it is entirely possible that one seller is trying to flame the other, but some evidence of my ICs with crud found on them leads me to believe that the claims of Chipforbrains may be true to some extent. Doepher_a100 and sDiy groups circulated alert messages just recently and the above message was from 5/20/06. If you really must have these super awesome ICs order them from VisualSound at a slightly higher price! Granted that HKSS’ BBD chips may very well be Vintage Authentic working pulls and may work just as well I guess the rule of “Buyer beware” holds. Other buyers who purchased parts from them claim fast delivery and no significant problems with ICs or switch lots. Will this stop me from buying switches, jacks, or more MN3207s from HKSS probably not, but asking if the ICs are new would not be a bad idea before bidding. I guess half of me says “Yes, the could be ripping me off and the money could be supporting the mafia” and the other half says, ” Yeah, but its so cheap!!!!”. If anyone else had simular experience with eBay sellers please feel free to email or post in the comments.
—- Revised on 5/22/06 Original Post here.