For those in the LA California area, here is an event not to miss, directly from Reed to you. 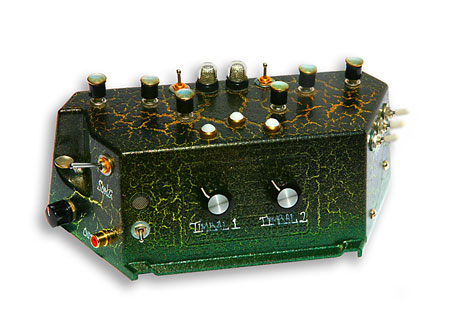 Instruments: a group exhibition of sound producing structures by Koh Byoung-o, Paul DeMarinis, Reed Ghazala, William Leavitt, Nam June Paik, Clare Rojas, Dani Tull, William T. Wiley, and Robert Wilhite to be exhibited at SolwayJones
June 27 – August 15, 2009. The exhibition will also include a historical and diverse selection of acoustic and analog electronic instruments made in 1970s to the present. A series of performances will be held in the gallery during the months of July and August.  Please call the gallery for further details and schedule.

Artist Info:
Reed Ghazala is recognized as the father of circuit-bending, discovering the process in 1966, and is credited with launching the first grass-roots electronic art movement.  ”Trigon Incantor” 2001 uses a Touch & Tell child’s game and altered Texas Instruments electronics realized as a human voice synthesizer controlled by steel balls positioning upon a pressure-sensitive stage.  The rolling movements produce loops of abstract sounds and unique musical languages.  Also on display are Ghazala’s Vox Insecta and Species Device. Ghazala is the author of numerous articles on electronics and experimental musical instruments including the seminal twenty-article circuit-bending series in Experimental Musical Instruments Magazine, 1992 – 1998. Reed Ghazala lives and works in Cincinnati, Ohio.

Since the early 1970s, Los Angeles artist, designer, and musician Robert Wilhite has been involved in a variety of sound-oriented performances that have been both an auditory and visual means of presenting sculptural objects to an audience. Instruments will include his 1977 sound structure, “Gongs from Ramona,” produced for the play, Ramona, a theatrical collaboration with Guy de Cointet. This exhibition will also include his early single string instruments including a Rietveld–inspired painted wood bow sculpture.

Los Angeles based William Leavitt is a theater artist, painter, and musician who has performed and exhibited in Los Angeles since 1975.  He wrote and produced his first theater piece, “The Silk,” in 1975.  Around 1988 he began working with Joseph Hammer and Rick Potts on experimental music projects. They collaborated on the music for “Random Trees”, a play that was presented at the Santa Monica Museum of Art in 1990.  As a cellist, he has performed in several local groups including Solid Eye, The Subtones, and Provisional Riviera.  He was awarded a grant from the National Endowment for the Arts for New Genres in 1991 and a John Simon Guggenheim Fellowship in 1998. This exhibition will include his hand-built instruments “Two by Cello” and “One by Bass” from 1991-92.

San Francisco painter, filmmaker, and musician Clare Rojas has been long known for her personal and signature folk art-like gouache and latex paintings of colorful crisp figurative subjects and landscapes, often painted on antique banjos. Her work has been associated with the San Francisco group of artists known as The “Mission School,” a loose collection of artists clustered together in the Mission District of San Francisco.  Two painted banjo works from 2007 will be included in the exhibition.

Northern California based artist William T. Wiley’s works have bridged painting, sculpture, printmaking, watercolor, set design, and filmmaking since the 1960s. His iconic and always humorous works have combined signature visual elements of interest ranging from the I Ching, Ancient Roman History, universal symbols, flags, Marcel Duchamp, fishing, and puns.  He has collaborated with the mime R.G. Davis, Robert Nelson, and Steve Reich in the film Plastic Haircut.  Wiley has also long been interested in playing music and making instruments from found materials often created as woodcut structures, whittled and carved with sound producing wires instead of guitar strings. The exhibition includes the woodcut guitar sculpture “DEBILSLIDE” from 1986.  His work was recently included in the exhibitions “The Third Mind: American Artists Contemplate Asia, 1860-1989” at Guggenheim Museum, New York, and “San Francisco and the Bay Area in the Sixties- Looking for Mushrooms,” Museum Ludwig, Cologne, Germany.  His upcoming traveling retrospective, “What’s It All Mean: William T. Wiley in Retrospect,” opens this October at the Smithsonian American Art Museum in Washington D.C.

Los Angeles artist and musician Dani Tull has collaborated and worked with a multitude of musicians including Marnie Weber, Eric Avery, Tom Watson, Raymond Pettibon, Jad Fair, Tracii Guns, and Jim Shaw. Recently Dani has composed original scores for two films by Jim Shaw. Instruments will include a work titled, “The Feel Spectre” where a player blows into a tube connected to a small box that combines a clamshell object made from plastic cups with an internal speaker inside that when activated emits strange growls. The player can open the clamshell to shape or “wah” the sound creating Tibetan-like Monk chants.

The “Pygmy Gamelan” from the early 1970s by San Francisco sound artist Paul DeMarinis is an installation piece for small electronic circuits.  Each “Pygmy Gamelan” module is a box that responds to fluctuating electrical fields (generated by people moving around, radio transmissions, the births of distant stars & galaxies) by changing the patterns of five-note melodies it plays.

In the South Gallery:

Guston Sondin-Klausner presents a single channel video titled “A Fossilized Moment of Doubt”. This video was produced in collaboration with the Tanzanian Department of Cultural Antiquities and Olle Moita Maasai. It traces the paleoanthropological narrative created by Louis and Mary Leakey at Olduvai Gorge through the experience of a caretaker of the site Olle Moita Maasai. Through this the video presents the narrative not as a dominate truth but as a beginning to an understanding of how western science has come to function through the current postcolonial landscape.  The video was exhibited at CCA Kitakyushu Museum Japan, 2008. Guston Sondin-Klausner will have a solo exhibition at the Tanzanian National Museum, 2010.

Gallery hours are Tuesday through Saturday, 11 am – 6 pm