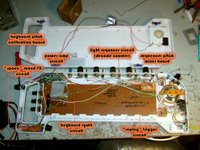 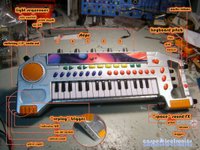 Pete of Casper Electronics has burned through quite a bit of midnight oil bending this beast and taking notes. Now we all can learn from his findings. Thanks.

The largest one is just the CONTROL INTERFACE. This holds all of the
function and piano key buttons. This connects to the keyboard audio
circuit with a ribbon cable.

The KEYBOARD AUDIO CIRCUIT is the keyboards “brain”. It processes the
pushbutton matrix (signals from the control interface board) and generates
the main keyboard audio signals. There is a trim pot on this board which
controls the keyboard pitch.

This circuit is connected to the POWER/AMP BOARD with another ribbon
cable.This mixes the keyboard audio signal with the “space” fx signal and
sends the signal to an amplifier. It then takes that signal and sends it
to a simple envelope follower type circuit which powers the light
sequencer circuit in conjunction with the amplitude of the audio signal.

The LIGHT SEQUENCER circuit receives an incoming signal from the
voltage/amp board and activates five different lights in sequence. The
rate of the sequence can be adjusted by removing a resistor from the board
and replacing it with a 1M potentiometer.

The “SPACE” FX circuit is a completely separate circuit. Both the pitch
and volume of this circuit can be adjusted independently of the keyboard.

PITCH CONTROL
You can make some pretty crazy warbling, screeching sounds by lowering the
pitch. It also does some cool stuff when you raise the pitch. Raising it
to the right level will create amazing glitch effects that work extremely
well with the drum beats and demo songs.
The tricky part is that there’s a very small pitch window in which this
glitch will work and if you turn the pitch up too high, the circuit will
crash. For this reason, I built in coarse, mid and fine tune pitch
adjustments. This allows the user to very finely adjust the pitch and take
advantage of the glitch feature. I also added a pitch calibrating board
for fine tuning the pitch range so that it can’t be turned too high or
low.

LIGHT SEQUENCER
The light sequencer circuit board outputs a voltage signal to each of the
five lights in sequence (one at a time) when the keyboard is making sound.
By taking the signal which powers the lights and routing that to the
keyboard pitch control pin, you can modulate the pitch. Unfortunately the
signal cannot power the light AND change the pitch at the same time. It
CAN but there are lots of problems that are caused by doing this (just
trust me). Because of this I installed a button which switches between
“light mode” and “pitch mode”.
Each of the five steps of the sequence has an on/off switch and a pitch
control adjustment. I also added a sequence rate adjustment and a total
pitch depth adjustment.
By setting each step adjustment to different points and switching the
sequencer to “pitch mode” you can make some interesting modulated
sequences.

“REPLAY” TRIGGER
The keyboard has a built in record and replay feature. This allows the
user to record short melodies and play them back.
I added a circuit to the keyboard that allows the user to trigger the
“replay” function using an external controller. There are two input jacks.
One is for a switch, like a foot pedal, the other is for voltage pulse
signals, like an LFO or gate signal from an analog synth.
The circuit itself is a simple transistor and opto isolator circuit. The
incoming signal activates two transistors. One turns on an LED (so that
you can monitor the incoming signal) the other powers an opto isolator
which then activates the “replay” function.
To do this I simply connected two wires to the points on the control
interface board that are connected to the “replay” pushbutton contacts and
wired them to the opto isolator.”