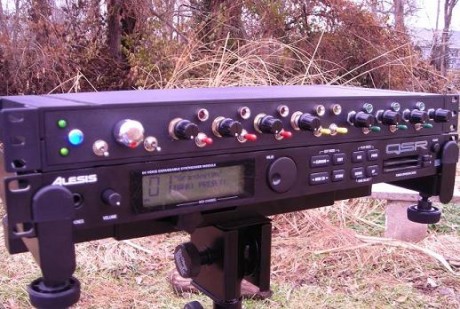 There comes a time when it seems every circuit bender hits a wall. I’ve been looking at the wall for a long time and no matter how many times I looked at it the only solution seemed to work with and learn the MIDI protocol.  In short MIDI is a digital protocol developed in the early 80’s by the likes of Dave Smith, Yamaha, Korg, Roland and other big synth manufacturers at that time. So control information and the synths had a standardization in order to communicate with each other between different manufacturers of synthesizers and controllers.

There are a lot of instruments that are circuit bendable that are MIDI capable. Unfortunately some of these MIDI capable instruments are not implemented very well with the protocol. Fortunately there are great devices by companies that really took MIDI and implemented in such ways that offer extremely detailed control over sound that is useful to musicians, sound designers and composers.

We are all familiar with circuit bent toys, they are cheap, safe to work with, and great to learn on. Some can produce a very surprising type of audio output from circuit bending. More often then not if you see a circuit bent performance by a circuit bender: their table is  full of many different toys. This variety is often mixed in real time to produced a shifting array of unusual sounds.  I’ve found each toy is like a “patch” which typically any musician using MIDI can scroll through a lot of patches during a performance. That is only possible through digital interfaces.  As a musician and circuit bender that has lugged around many different bent devices through many city streets, transportation systems, and airports I can say that this is very unpractical for non-benders and professional musicians to carry around many different bent instruments for the sake of having different “patches” during a performance.

Professional digital synthesizers that are implemented well over MIDI will offer a modulation matrix, several MIDI channels (16-32 different voices) of different programmed sounds to play at once with each sound having precise control over each sound’s parameters and triggering. They will allow precise detail in editing and how your control information interacts with customized bent sounds.

When we look at instruments without MIDI we are looking at the device itself and the bender’s hardware designed interface. Often these are strewn with fragile components located on odd shaped enclosures with an interface that makes sense to the bender but often can be very confusing to anyone else. Once the interface is made there is no other way to communicate with the device with your controllers and other equipment in the studio. Depending on the bent interface you are limited to the controls it offers. Whether its a homebrew sequencer or a bunch of switches, a clunky patchbay with lots of cables, you as a musician would have no say in how to communicate with the instrument or whether or not you prefer the patchcables, tons of switches, etc.. unless of course the musician would choose to DIY which is ultimately the best way to approach circuit bending imo, in your own way.

The problem is that I circuit bend professionally and I’ve been listening to complaints of professionals in regards to circuit bent instruments: they’re unstable, hard to travel with, I can’t integrate my existing controllers with the instrument, they are just toys that are severely limited. In response I decided to work with rack synths because they can be racked safely without damage during travel and the ones I’ve been working with are true professional instruments. All the bends are  informed by correctly addressing each chip to ensure stability and by not cross bending any chips on the build.

This is a recent release by Spunkytoofers Electronics called the Wavecaper. A circuit bent Alesis QSR Quadrasynth. It features extensive MIDI implementation and a deep synthesis archeticture as well as a comprehensive effects processor and a fully editable drum synth. With this design I wanted the entire bent interface under MIDI control. Any MIDI source: MIDI cc’s, program changes, tempo synch, MIDI machine commands, notation can be routed to any destination on the circuit bent interface via sysex programming. The onboard modulation matrix on the Alesis Quadrasynth has 6 source/destination for the synthesizer itself, 2 source/destination for the fx processor and the added MIDI circuitry for the bent interface adds another 12 source/destinations. In total you have a 20 source/destination modulation matrix. Probally one of the largest I’ve seen on a MIDI controlled hardware synth.

The circuit bent interface features two patch bays on a bank of rotary switches. One patch bay is 10 points dedicated to the effects processor bends while the other patch bay  is 24 points dedicated to the oscillator bends.  With rotaries you can get creative and efficient. No more massive amounts of drilling for point to point patch bays. With rotaries you can select your bends, stack your bends so quickly that if you are sending the rotaries sequenced information you can custom circuit bend your oscillator waveforms, effects and the sample rate on the fly. This is somewhat reminiscent of wave sequencing although this is definately much more unusual and bizarre and completely open to programming and free sequencing and control.

Rather than go into details of exactly how I bent this I want to share some amazing little creations by other benders. These are little plug ins that circuit benders can use rather then develop their own circuitry that is time consuming.  Following in the spirit of circuit bending’s immediacy I find these tools exceptionally invaluable.

The first one is by the owner of this blog, Getlofi.  Alex has created the LTC1799 oscillator kit which allows you to replace the clocks of various functions on devices and control them under variable controls like knobs. in my implementation of the circuit bent Quadrasynth I have the LTC1799 controlling the overall sample rate. The sample rate is controlled via a knob or switchable to MIDI control.

The second device is by Highlyliquid called the MPA, it is a decoder kit that offers potentiometer control in ranges from 10k, 50k or 100k. I have the mpa controlling the LTC1799 kit. Since the LTC1799 offers such stable control and the MPA handles very dense midi information without any hitches these synch up perfectly with each other.

The third device was critical. Sometimes if you do not have true mechanical switches you will not get a proper bend. Any amount of capacitance, resistance, and electronic leakage into the contacts you wish to bend can cause a bend to not sound right or even make the instrument less playable!!!  I tried building my own circuits for quite awhile and spent much more time then I like trying to develop a circuit but the solution and the life saver was highly-liquid msa-r kit which has 8 reed relay switches under midi that offer true mechanical connections that are electronically isolated.

These products allow you to get to your intended results much quicker as a bender. Just like when we approach bending to get quick results over existing devices we do not have to develop deep programmable synthesizers ourselves and do everything ourselves..with these kinds of resources availble to us we no longer have to stare at walls, but can now focus back on what I hope is what originally got us into this circuit bending mess in the first place. The music!

more information can be found here: 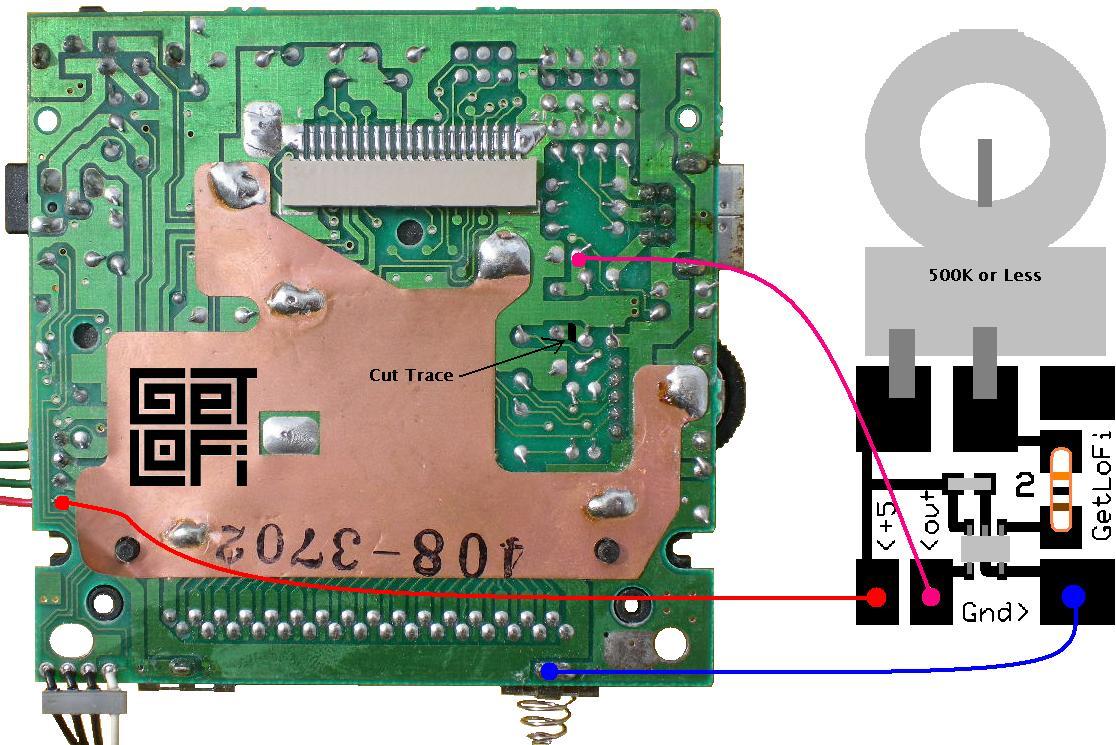 As promised, here is a GetLoFi take on modifying GameBoy DMG-01 with pitch control via the LTC1799 Precision Module from the GetLoFi Shop. The process to replace a fixed 4.19 MHz crystal with a variable digital clock is pretty strait forward, however we will not be responsible for any damage to your hardware, so please do this at your own risk! 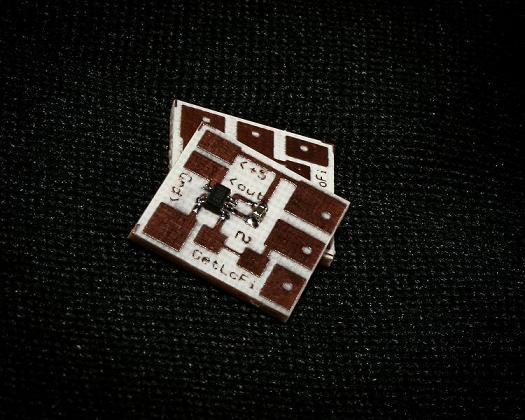 First you will need some assembled LTC1799 modules from the shop. You will also require an original Nintendo Gameboy, note that it is possible to modify Gameboy Color and probably Pocket however Gameboy Advance and SP currently do not work.

Open up the Gameboy by removing 6 screws and gently remove the top half by unplugging the ribbon cable. To make room for the potentiometer take out the speaker by clipping yellow wires. Carefully drill an appropriate size hold in the speaker grill from the inside. The legs of the potentiometer may need to be bent upwards, DO NOT use a hard surface to do that, the entire assembly may snap off! Use pliers to gently bend them. Attach one wire to the center and one to an outer leg for connecting to the pads on the LTC board. The value of the potentiometer may vary depending on your application. For drone-like sounds a 500k or larger may be good, but if you just want ~50% BPM adjustment try a 50k.

To wire up the bottom half start by cutting the lower trace of the crystal, no sense in desoldering it, this also leaves the option to restore the connection. Take a closer look at the diagram before doing this. DO NOT cut any other traces around and check to make sure its completely cut with a continuity tester. Connect the output of the LTC Module to the upper leg of the crystal as indicated in the diagram. This is where the clock signal will be injected into the CPU. Use thin wires cut to length, if they are too long or too thick closing the case will be a problem. 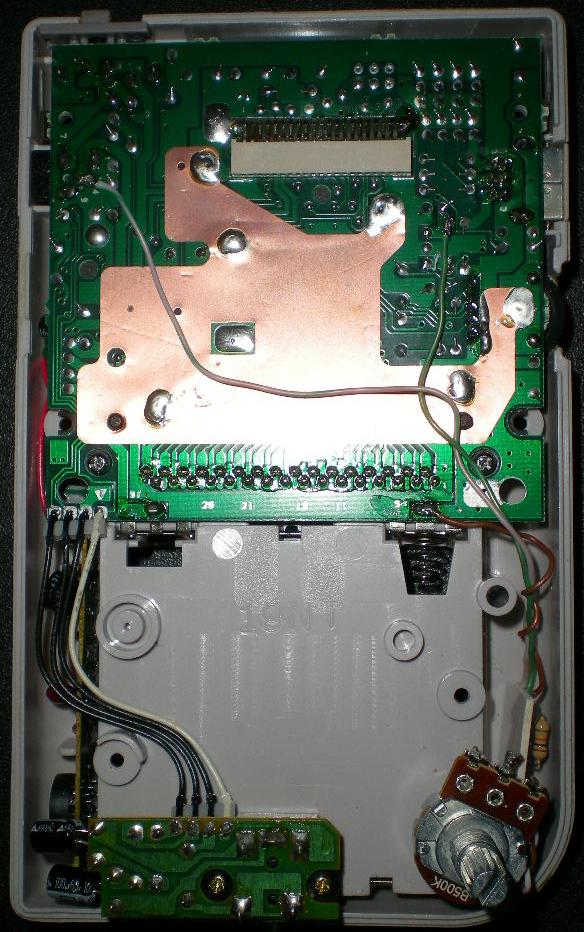 Next connect to the Ground point to the LTC Ground pad, then Positive point on the DC Jack to the +5 volt pad on the module. Refer to the above diagram once again. The final step is to install a Trim resistor on the LTC board. Cut the trace between two unoccupied square pads and solder in a 10K resistor. This will prevent the Gameboy from crashing when the CPU frequency is too high. Reattach the top half of the case via the ribbon cable and turn the system ON, because the speaker was removed you will not hear the tone unless its plugged into an amp. Adjust the potentiometer to make sure the clock modification is working. 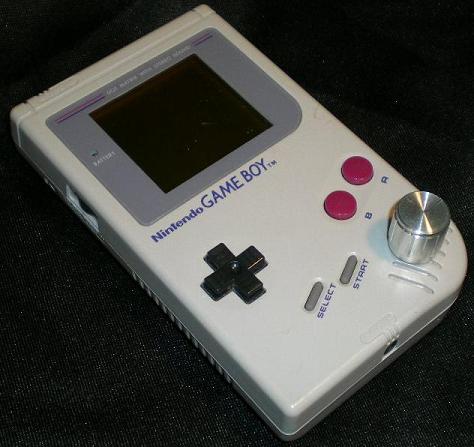 Once everything checks out, neatly arrange wires and slide the module into the groove on the right side of the battery case. Make sure there are no wires right under the potentiometer or the system will not close. Reinstall the screws and test the system, at this point you are done!