Over the weekend I have finished building a distortion box, which I will post about soon. In the process I finally cashed the $2.99 soldering iron reviewed months ago, it worked well for a while I do admit. Before it bit the dust I did have enough foresight to order a new and better soldering solution. Today it arrived and no more cheap soldernig sticks for me, A Soldering Station is the way of the future! After getting the best deal on the planet through eBay, for $19 I ended up with a Brand new Elenco SL-5 that is Grand. It featues a sturdy and heavy base, a 5 to 40watt heating adjustment, and a solid 3 prong grounded Weller-like stick. To boot it was made in USA ( I would’ve also excepted Canada or UK ) so the box claims. Ahh Yes! Ironically enough Elenco was the company I raved about earlier with all the kit PDFs for download.
A few words of wisdom if I may:
Don’t purchase cheap soldering sticks ( unless you have to ), they will break and wear out after prolonged use. 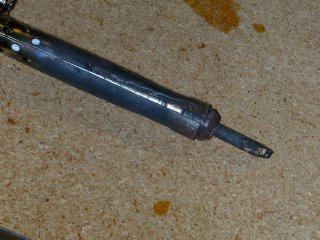 Especially the ones with folded sheet of metal, they will wobble and split eventually causing much frustration in the end.