The Circuit Bending Challenge 2007 was a blast. I hope that everyone saw plenty of this… 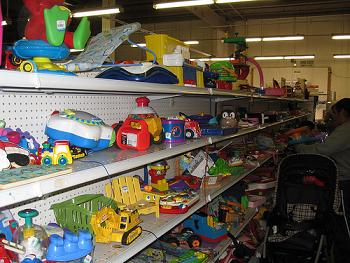 Goodwill in Seattle with some good pickins. Is that a Musini on the top shelf? 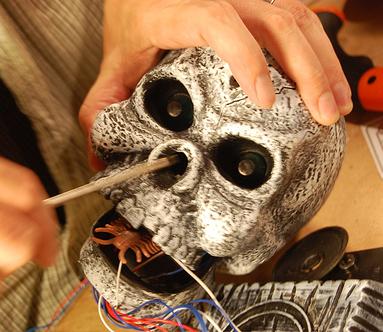 Onto the Entrees: ( In no particular order and let me know if I’m missing anyone… )

Very impressive, I didn’t know that even the Mini-Furbies could be bent to glitch out like crazy.

Very strange Toy to begin with. Who would’ve though that people actually capitalize on the image of Jesus for profit. Oh well, its bent now and it sounds like a creepy zombie.

Strange Black Box by Evil Paul looks to be an effects processor of sorts, possible from a Halloween costume. Also to note that he was the first person to upload stuff to the challenge.

Great blog to peruse through and a nicely detailed bend. 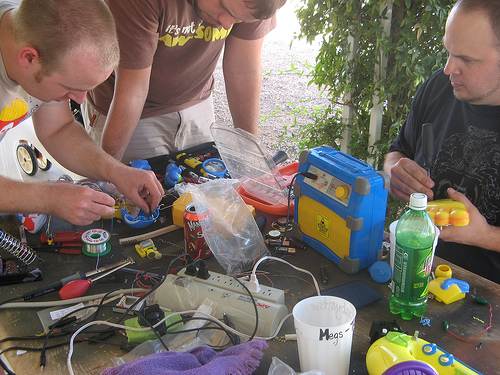 The Kevin Rees’ Team looks to be having some good messy fun with a noisy result.

Zapper by Vanillatray, also one of the first to submit to Flickr. Damn, nice work on the output and the touch contacts.

Circuit Bent toy guitar from Lohan and Lukas Larsby, nice work. Its actually very neat to see how 2 bodies can effect the pitch resistance of the same instrument.

Drum Toy from Brian. The team made sure to have plenty of nutrition and stayed well hydrated. Wouldn’t want to see anyone get hurt during this grueling event. 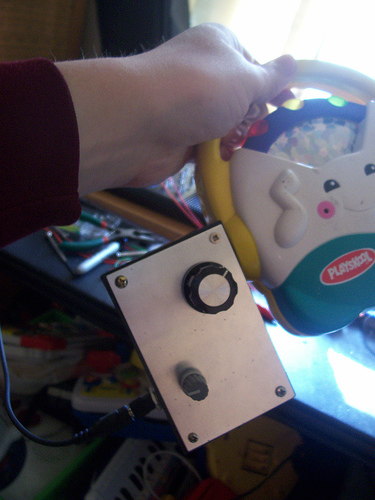 Entry by Loss1234. Not much info there but it looks like they used a CD4001 circuit for an LFO. 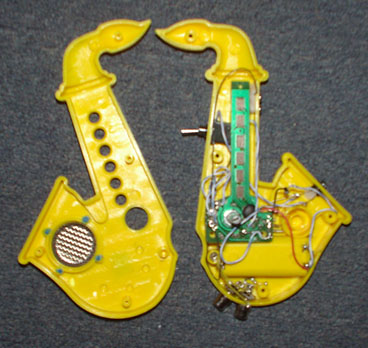 Sax toy from Fin, nice compact wiring, unfortunately it apparently died a horrible horrible death, soon after being bent. But not before leaving this lovely sample of the sound behind. Oh my, certainly Fin gets the prize for most toys broken.

Squelchbox’s Puzzle toy with a gnarly paint job and a wicked touch board made out of some vintage video tape. Great job on going out on the limb to make that work. 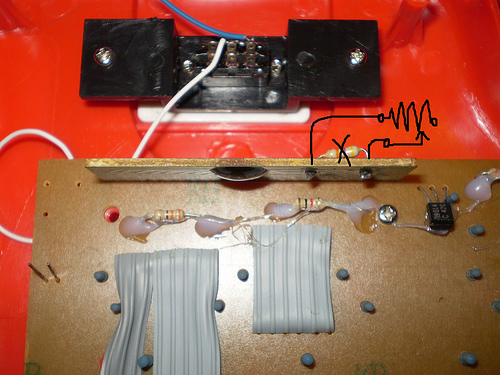 Octatone’s cheap guitar. Nice sounds from the body contacts. Could be some serious damage if that thing was plugged in through a delay pedal. 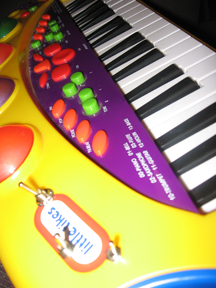 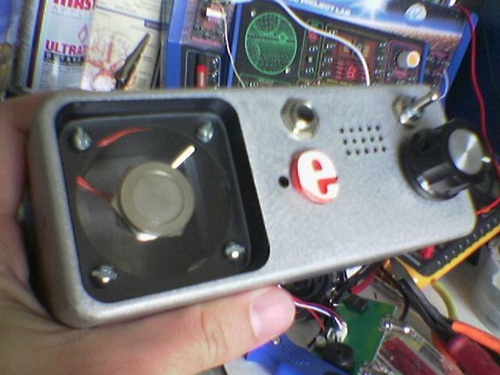 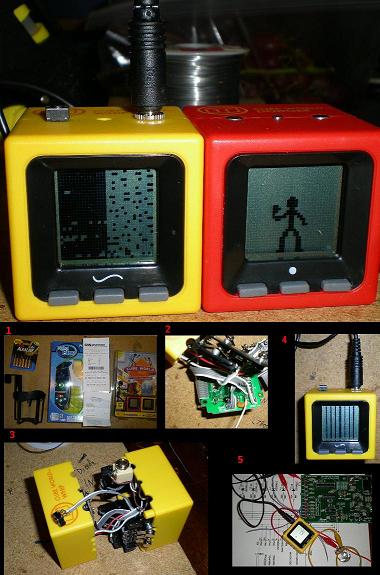 And finally here is the GetLoFi entry…a little bit about my experience:

After getting a very late start on the challenge and the day in general I was out on pedal power heading towards a far away Goodwill. Once there I discovered a very lame selection of toys and given my limited carrying abilities and with the time ticking away decided to try my chances at the Stuff, Etc consignment store fairly close by. My trip to Goodwill was not in vain, I did find a sweet beer bottle holder out in the parking lot, Score! Stuff, Etc is actually pretty good, lots of very nice things especially after they sit around for a while and noone buys them, typically 50%-70% savings. Indeed the store had a nice selection of digital toys. I ended getting something called CubeWorld Interactive People and a Digital voice recorded made by Cartoon Network all for a cool 10 spot. ( fig 1 ) Although the voice recorded thing I did not get to it does look very promising as far as glitches go.

Once back at the lab I proceeded to open the Cubes, which are almost like Tamagotchi pets. Aside from some LCD display glitches there was not a lot that I could find by pocking around. The only thing that I could really mess with was the 4.0Mhz resonator which drives the clock for the CPU. By wiring one leg of the resonator ( fig 2 ) to a simple 4093 variable speed oscillator I was able to create visual glitches and some random events to happen with the CPU. Due to limited space inside of the cube, I had to install a jack for accepting an external clock source and also rewired the small reset button to the top of the cube for easy access because this thing does crash A LOT. ( fig 3 ) The results were pretty neat but hard to capture with a digital video camera. The screen would glitch out with lines and the stick figure animations on the screen would break and look all scrambled. ( fig 4 ) What came next was really an extra idea that has been a dream of mine for a long time. It consists of using a simple micro controller to create a Random Bit Signal Injector. One Button generates the random sequence and the other buttons either play it once or play it as a loop into the clock input on the toy. ( fig 5 ) So far my results were mixed, although glitches were generated they are not the same as the glitches generated by using only the analog 4093 IC oscillator circuit. Something was not the same and as of 12:00 PM last night I was not able to come up with the solution. However the goal of the Circuit Bending Challenge 2007 was achieved. Toy was bought, toy was bent. Thanks to everyone for sharing and participating.

Big Thanks to Mike Una for suggesting, the Circuit Bending Challenge 2007. Peter Kirn of CDM for hosting the forums and to everyone for playing along. Keep those submissions coming of you haven’t posted already. In the mean time we’re gonna start deliberating on the winners. –CM