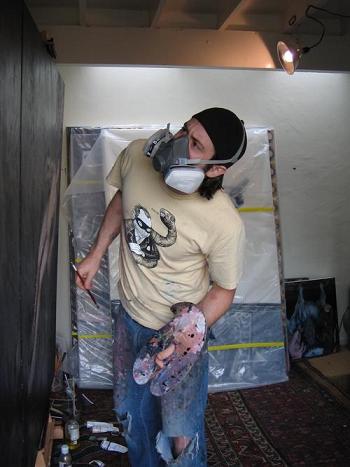 According to an interview done by Second Supper a college paper in LaCrosse, WI. Wes Borland is into circuit bending. Some of you may remember Wes as the heavily costumed guitar player of Limp Bizkit from the late 90s, early 2000s.

“…WB: I guess when I was younger I thought in terms of being just a guitar player, but I don’t think that people should stick to just one instrument. Synthesis is so interesting, synthesizers and pedals and crossing the streams of different things into each other. Running keyboards through guitar amps and running children’s toys that have been tweaked. What I’m into lately is circuit bending and people who take those kids’ toys and make them sound like the devil. I do that kind of stuff. I’ve also got a cello, a violin, a French horn, and a sax, which I use. I like generating noise – a lot of noise – and sound through other things than just a guitar. There’s not a rule written anywhere that you have to stick to just one thing, and I think it’s important for musicians to explore. When you approach an instrument that you have no idea what to do on, there’s a naïveté that I think is really precious. You don’t know the territory, so you’re going to approach it like you would your own instrument, and get sounds and ideas that you wouldn’t get out of your own. Exploring is something I’ve always done and will always do.”