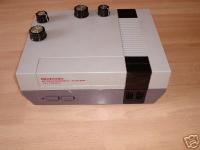 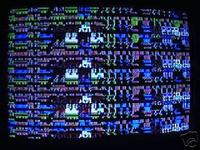 This time it has knobs to control the multipole switches creating glitches and crashes. Speaking of bent systems, I spent about 4 hours last nite working on the Master System. It was very frustrating to say the least. The chip schematic I found earlier is the correct one for the 315-5124 chip. The xtal is 10 mHz, the power and audio out pins correspond perfectly. The goal of the experiment was to see if data could be altered or sent to the TI76489. After trying long and hard it was determined that it was not possible using the simple techniques at my disposal like timers, diodes, and jumpers. The system crashed everytime something unexpected was introduced on the chip. I suppose I need to get some logic ICs like flip-flops and Schmitt triggers and try again. The system does crash very easy so I would be willing to bet that most of those bent consoles crash like there is no tomorrow resulting in glitched up screen. As far as audio goes during the crash you just hear the last note being played as a drome and some data noise once in a while. The creator of the bent Nintendo consoles promissed me more files so I will post those once he comes through.