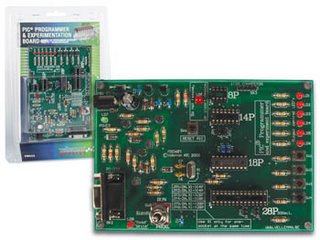 Velleman Kit VM111 was picked as the development platform for several reasons:

Google link to retailers and the place where I ordered my VM111 from.

MIDI and PICs are the holy grails of the DIY Musicans. Every MIDI enabled gadget instantly draws oohs and aahs from unsuspecting mainstream gear users. However the truth is that MIDI programming and custom hardware controllers are now more affortable and easy to make then ever. In this blog I hope to provide quick tips for setting everything up to transmit that first MIDI note with a simple and cheap PIC microcontroller. 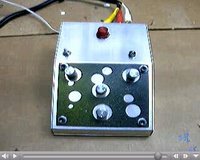 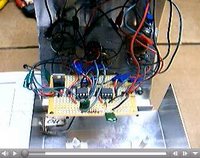 Tony of ElectroKraft sent me a couple videos featuring his new Glitch box. In the second video you can clearly see the circuitry consisting of 2 PIC12F683 Microcontrollers. These are relatively inexpensive 8 pin ICs with lots of musical possibilities. The term 8Bit does get tossed around to describe an era of sounds generated by a Nintendo system, however in this case you can truly say 8-Bit because PICs are just that. Video 1, Video 2

These EasyPic development boards and programmers look cool enough just sitting there, however once programmed they can be used for PIC exploration or development of complete prototypes. Everything you need is already there, LCD, buttons, LEDs, ADs and DAs, PIC, software, and cables. Basically these can be used for a variety of musical applications including synth prototyping with the DA converters, sequencer building because boards have several rows of push buttons as well as LCDs and LEDs for note readouts. Drum machines and possibly even samplers can be built to utilize the memory card storage. Basic models start at around $169 from Circuit-ed.com however some places may have them even cheaper, but without extra parts like the LCDs and PICs.