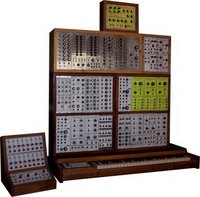 This most certainly is news to me, so if someone already covered this, my apologies. However it appears that Ray Wilson, the man behind MFOS has completed his Dream synth, according to the new posting on the website. I am not sure if the SoundLab MiniSynth and the sequencer are used for props in this photo, because the huge modular appears to already have a sequencer and a MIDI to CV converter. A great accomplishment indeed, there are some sound samples on the synth page, however they are mainly soundscapes to be released on CD very shortly. More melodic stuff is coming soon according to Ray. I would be really interested in seeing some PCB shots and wiring. Just to get a hint on the number of hours spent making this monster. Also wonder how much it cost to build? Any guesses.